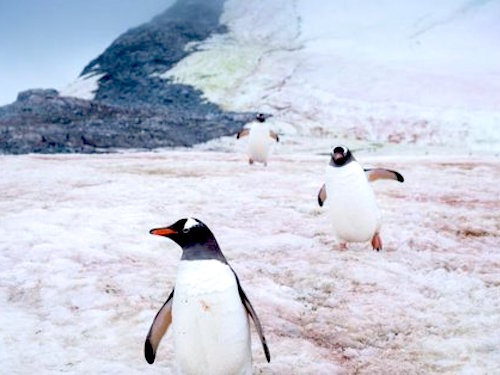 Blooms of red and brown algae showing up in Arctic, Antarctic, Alpine, and Himalayan regions are darkening snow and speeding up ice loss, in a relatively new trend that is not reflected in expert models for global sea level rise.

The phenomenon might help scientists understand an acceleration in ice loss that cannot be explained entirely by rising temperatures, National Geographic reports.

“It’s a vicious circle, as often happens with climate change,” said University of Sheffield glacier specialist Joseph Cook. “More heat means more meltwater and yet a larger area where algae can grow, causing more ice to get darker and more of it to melt.”

University of Bristol biogeochemist Alexandre Anesio explained how easily that vicious circle began to develop. “In order for [the algae] to form visible blooms and increase the melting of the snow and ice, they just need the right conditions, which at a minimum involve basic nutrients and melting,” he said. “As the climate gets warmer, the availability of liquid water from snow and ice becomes higher, favouring the growth of snow and ice algae.”

National Geographic opens its report in Greenland, where Bristol polar biogeochemist Martyn Tranter is running the multi-year Black and Bloom project to determine how and why the ice sheet is melting. “Warming temperatures alone cannot explain the increased melt,” he said. “So it’s become crucial to understand all the drivers in the ice melting.”

Tranter described the algae as “photosynthetic organisms that produce biological sunscreen molecules to protect them from the sun, which in the Arctic in summer stays above the horizon up to 24 hours a day.” The resulting darker surface reduces the area’s “albedo”, its ability to reflect sunlight back into space, so that the ice absorbs more light and melts faster.

The stakes are high, National Geographic notes, because “the Greenland ice sheet is the biggest piece of ice in the Northern Hemisphere. Each year, it loses 270 billion tons of ice as the planet heats up, adding a fraction of an inch to global sea levels. The amount of melting is speeding up year by year, and if the entire ice sheet melted, it would add 20 feet to sea levels.”

The effects of a faster melt would be felt “in coastal areas from New York to Shanghai to Miami, as well as in low-lying areas like Bangladesh and Indonesia,” the magazine adds.

Yet the Intergovernmental Panel on Climate Change (IPCC) said nothing about ice algae in its most recent assessment report, which dates back to 2013. “Our mission is to put firm numbers on it,” Tranter said. “How much darkening? Over how much area? Leading to how much melt? These are the questions that will enable us to estimate how much melt might occur because of that, and so improve our sea level rise forecasts.” (h/t to The Energy Mix subscriber Angela Bischoff for pointing us to this story)