Time to ‘Disempower’ Climate Deniers Rather Than Debating Them, UK Parliamentarian Urges 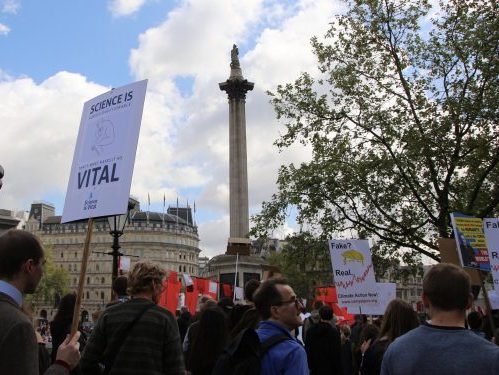 Rather than engaging climate deniers in endless, pointless debate, it makes far more sense to disempower them, according to a collection of UK scientists, academics, and politicians appalled by the continued rise of far-right populism both in their own country and across Europe.

After witnessing a summer of record heat, drought, and wildfires around the globe, Green Party Member of European Parliament Molly Scott Cato says she found it “deeply disturbing” to return to her work in Brussels and find that a notorious climate denier, UK Independence Party (UKIP) MEP Stuart Agnew, had been chosen to write a critical report recommending best disbursement of funds for climate action in the agricultural sector.

Some of the claims in the report “are, frankly, pretty hair-raising,” Cato writes, noting in particular his claim that C02 levels have a “negligible” impact on climate.

As an earlier Guardian report notes, Agnew also rejects outright the striking human role in the climate crisis, attributing current warming to such things as “gravitational pulls from elsewhere in the galaxy”. He deletes all “references to climate mitigation and obligations under the Paris Agreement,” and recommends instead that the €5.45-billion green fund which is the raison d’etre for his report be used to ready the EU for an “impending” little ice age produced by low sunspot activity.

Agnew’s “shameful” nonsense received a firm smack-down from climate scientists, Cato notes. “There is not a single scientific institution in the world that would agree with this daft assessment,” declared Bob Ward of the Grantham Research Institute on Climate Change and Environment at the London School of Economics.

But that pushback is cold comfort to Cato, given the threat that populist parties like the UKIP currently pose to climate action. A big part of the problem is that Agnew’s mandate to write the report did not come solely from far-right blocs like the European People’s Party. “Unbelievably,” she reports, “the decision to appoint Agnew was met with support from Christian Democrat, Conservative, and Liberal members of the European Parliament’s agriculture committee.”

And Cato says the trend is not limited to Brussels: Climate denial is alive and well in the UK, abetted by news outlets that cling to the notion that the public is well served by having the reality of climate change regularly “debated.” Cato points to the BBC, in particular, for continuing to give regular airtime to the likes of neoliberal “dinosaur” Nigel Lawson, who “founded the Global Warming Policy Foundation to oppose climate change mitigation policies.”

(Since Cato’s post appeared, the BBC has admitted that “we get climate change coverage wrong too often” and told editorial staff they needn’t put a climate denier on the air to “balance” the “debate” against settled climate science.)

Even more troubling, she writes, is the rising star of “hardline Brexiteer” Jacob Rees-Mogg, who “has blamed high energy prices on ‘climate alarmism’ and has said it was unrealistic for scientists to project future climate changes, just as it was difficult for meteorologists to correctly predict the weather.”

Gravely alarmed by “the dangers posed by the far right and the very real threat of a significant bloc of populist, climate change-denying MEPs after next year’s European elections,” Cato urges all “who back the overwhelming scientific consensus on climate change to take back control.”

She says she recently “joined other politicians, scientists, academics, and campaigners” in pledging to “refuse to debate those who deny that human-caused climate change is real,” focusing instead on the urgent questions of “how we address the causes and effects of dangerous climate breakdown.”

But that’s just one step in disempowering the “populist” juggernaut sweeping both the UK and the EU. “The large right and centre-right groups in the European Parliament could and should have blocked the UKIP from taking charge of a report on climate change,” she writes. “We can only hope that the mainstream groups in Parliament—right, left, and centre—that are likely to continue to control the majorities will show a greater degree of responsibility in future.”