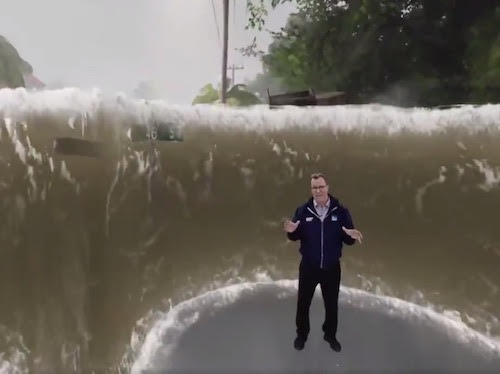 With Hurricane Florence bearing down on the North Carolina coast and 1.5 million people under evacuation order, a secondary storm of news coverage laid out the dysfunctional state of U.S. hurricane preparedness—from the coal ash disposal sites and nuclear power plants in the storm’s path, to the state’s ill-advised attempt to legislate against the reality of sea level rise in 2012, to Donald Trump’s preposterous claim that nearly 3,000 hurricane deaths in Puerto Rico last year were no more than fake news.

Earlier in the week, with its outer edge expected to hit the coast Thursday morning, Florence was packing 140-mile-per-hour winds. The eye of the storm was “on track to crash into the southeast U.S. coast Friday and slow to a crawl, an ominous forecast that could deliver rainfall measured in feet rather than inches,” the Washington Post reported. The National Hurricane Center warned Tuesday that a “life-threatening storm surge is now highly likely” along the North Carolina and South Carolina coasts, and evacuation orders covering 1.5 million people went into effect in the Carolinas and neighbouring Virginia.

“This storm presents us with multiple threats, multiple hazards,” said Jeffrey Byard, associate administrator of the U.S. Federal Emergency Management Agency, after forecasters warned that coastal North Carolina could receive more than 30 inches of rain near the storm’s landfall. “They add that higher terrain in the Appalachian Mountains and the Piedmont—including much of Virginia—already is saturated from unusual summer rainfall and can’t soak up any more,” the Post noted. “Major flooding could affect areas as far from the projected landfall as Maryland, the District of Columbia, Pennsylvania and the Ohio River Valley if the storm turns north after coming ashore.”

On Grist, veteran meteorologist and climate hawk Eric Holthaus described Florence as a “North Carolina-sized Hurricane” bearing down on North Carolina. “Florence is already one of the worsthurricanes ever to threaten the East Coast, and there’s nearly unanimous consensus among the most reliable weather models that the storm will grow larger and more fierce before it hits land,” he wrote.

While later reports had the storm losing some of its intensity, rather than growing to a Category 5 after traversing the “bathwater-warm” Gulf Stream, Holthaus reported that “Florence poses three main threats: wind, heavy rain, and storm surge (the wall of water pushed ashore when a storm makes landfall). All three could come in record quantities simultaneously.” The storm surge could hit 15 to 20 feet, “enough to eclipse the East Coast record and overwhelm fragile and densely-populated barrier islands,” he wrote. “After making landfall, the most reliable weather models show Florence stalling over the Carolinas and Virginia for up to four days, similar to what happened in Texas with Hurricane Harvey last year. The deluge could extend for hundreds of miles inland.”

The Week published a “terrifying” Weather Channel visualization of what six to nine feet of flooding would look like. “Cars start floating in two or three feet of water, ‘so you’ve got no chance of escaping by vehicle,’ the Weather Channel’s Carl Parker explains of depths that could hit much of eastern North Carolina. At six feet, the rushing waters pushed by wind become life-threatening for people and pets. At nine feet, escape is nearly impossible. And it all looks a lot more terrifying in augmented reality.”

“Please, folks,” Parker urged. “If local officials tell you to get out, you’ve got to get out.”

InsideClimate News warned that days of torrential rains and flooding “could weaken and collapse the impoundments” that hold back toxic coal ash piles across the southeastern United States, after Hurricane Matthew, a mere Category 1 storm, did exactly that in North Carolina in 2016. The waste from coal-fired power plants contains a brew of heavy metals and arsenic, and “unless you’ve been on a river or lake and seen them up close, it’s tough to realize how high these piles are,” said Sam Perkins of the Catawba Riverkeeper Foundation. “Sometimes coal ash is piled 100 feet high.”

The three states on the storm’s path also have 16 operating nuclear plants, and utility Duke Energy said it could take “days to several weeks to restore power to all customers” after the facilities shut down for the storms, Reuters reported. “We anticipate Hurricane Florence to be a historic storm that will impact all customers,” said company spokesperson Grace Rountree. At least one of the plants, the Brunswick nuclear facility in Southport, NC, was identified in 2015 as one of the most vulnerable to sea level rise on the U.S. east coast, EcoWatch recalled.

CityLab reported from rural North Carolina that “widespread poverty, lack of transportation resources, and poor Internet service could complicate emergency response” in a part of the state that still hasn’t recovered from Matthew. “It’s our poor, rural communities that are often hit the hardest in events like this,” said Randy Creamer, a disaster relief coordinator for the South Carolina Baptist Convention.

“If you live in the country, you’re more accustomed to the occasional power outage, because you know no one is coming to help you,” he added. “But when you get to the economically depressed areas…a single mom working three jobs, there is not a lot she can be thinking about how to get over this all by herself.”

While the U.S. east coast prepared for Florence’s arrival, the big-picture coverage pointed to an intensifying climate crisis. The Washington Post noted that meteorologists were tracking a near-record onslaught of multiple simultaneous hurricanes and typhoons across the hemisphere.

“There’s good reason to believe that a storm like Florence is made more likely by the warming atmosphere,” Grist’s Holthaus explained. “Warmer air can hold more water vapour, making rainfall in hurricanes more intense. At peak hurricane season, ocean temperatures in Florence’s path would probably be strong enough to support its current intensity even without global warming, but the extra degree or two has made the storm’s rapid intensification that much more likely.” And the foot or so of sea level rise that has already occurred “will obviously worsen coastal flooding.”

Post climate specialist Chris Mooney reported on recent research suggesting that some hurricanes may soon intensify enough to qualify as Category 6—a designation that does not yet exist.

But none of those realities seem to have been in evidence in 2012, when North Carolina’s Republican-dominated state legislature passed a law banning policies based on forecasts of sea level rise. The state’s Coastal Resources Commission had recently calculated that water levels would rise 39 inches in the next century, The Guardian recalled. The bill became law after Democratic Governor Bev Perdue declined to either sign or veto it.

“The science panel used one model, the most extreme in the world,” the bill’s sponsor, legislator Pat McElraft, said at the time. “They need to use some science that we can all trust when we start making laws in North Carolina that affect property values on the coast.”

“If your science gives you a result you don’t like, pass a law saying the result is illegal,” snarked comedian Stephen Colbert. “Problem solved.”

Never to be outdone, Donald Trump weighed in on the looming crisis by claiming the U.S. government was “as ready as anybody has ever been” to respond—and that the country did an “incredibly successful” job last year in Puerto Rico, where 2,975 American citizens died in the wake of Hurricane Maria.

“If he thinks the death of 3,000 people is a success, God help us all,” tweeted San Juan Mayor Carmen Yulín Cruz, adding that Trump’s claims added “insult to injury”.

While Trump tried to dispute the documented death toll in Puerto Rico, 83% of local residents “reported either major damage to their homes, losing power for more than three months, employment setbacks, or worsening health problems, among other effects of the storm,” the Washington Post noted, based on a Post-Kaiser Family Foundation Poll, with significant to overwhelming majorities dissatisfied with the government response at all levels. But none of that stopped the Trump administration from diverting nearly US$10 million from FEMA’s hurricane response budget to Immigration and Customs Enforcement (ICE), the agency best known for ripping children from their parents’ arms to enforce Trump’s family separation policy at the U.S.-Mexico border.