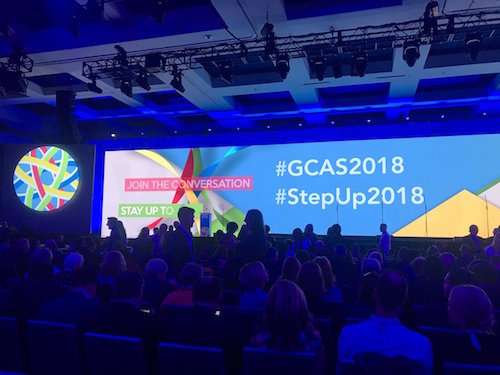 The Global Climate Action Summit in San Francisco is entering its second day, with media and other observers scrambling to keep up with a cascade of carbon reduction announcements and commitments. Climate Nexus is live-blogging the news as it breaks.

Here are some of yesterday’s highlights:

• The Science Based Targets initiative announced it had signed up 488 companies in 38 countries with combined market capitalization of nearly $10 trillion—about one-eighth of the global total—to set emission goals consistent with the Paris Agreement. The group includes nearly one-fifth of all Fortune Global 500 companies and produces 795 million tonnes of CO2 equivalent per year from their direct operations alone.

• The Powering Past Coal Alliance added 10 new members committed to a complete coal phaseout, including Wales, the Australian Capital Territory, and the U.S. states of Minnesota, Connecticut, New York, and Hawaii. The Alliance, which was aiming for at least 50 members by the end of the year, now has 74, including 29 countries, 17 sub-national governments, and 28 businesses.

• 73 cities unveiled plan to boost resilience and become carbon-neutral by 2050.

• California, Oregon, Washington, British Columbia, Los Angeles, San Francisco, Oakland, Portland, Seattle, and Vancouver committed to a 50% reduction in food waste and loss by 2030, and to quantifying the resulting difference in emissions, via the Pacific Coast Collaborative.

• 26 states, regions, cities, and businesses, representing a population of more than 122 million, adopted 100% zero-emission vehicle targets through the EV100 initiative.

• 400 investors managing US $32 trillion in assets promised to speed up and scale up climate action across four areas: Investment, corporate engagement, investor disclosure, and policy advocacy.

• IKEA announced that its delivery services will be 100% zero-emission by 2020 in Los Angeles, New York City, Shanghai, Paris, and Amsterdam, and by 2025 across all its operations.

• The Port of Rotterdam, the largest port in Europe and tenth-largest in the world, adopted a carbon neutral target in line with the Paris Agreement. The port accounts for 20% of The Netherlands’ emissions.

• Kaiser Permanente, one of the biggest private health care providers in the United States, closed a 180-megawatt renewable energy purchase that will set it on course for carbon-neutral operations in 2020. The deal will power 27 of Kaiser’s 39 hospitals and fund the construction of utility-scale solar and wind farms, plus one of the largest battery storage systems in the U.S.

• Starbucks promised to operate 10,000 greener stores worldwide — using less energy and water, and investing in wind and solar energy to power the stores.

• New Jersey Governor Phil Murphy, announced his state is on course to install 3,500 MW of offshore wind energy capacity by 2030.