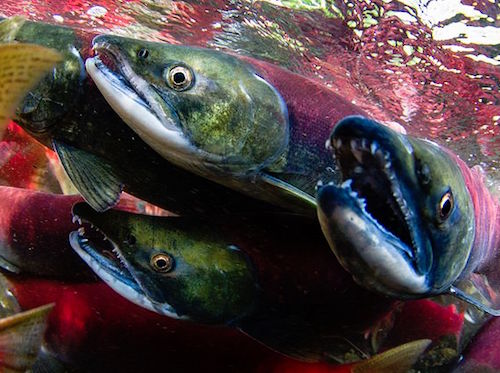 Even brief exposure to diluted bitumen significantly impairs the development and survival of sockeye salmon eggs, according to a new paper in the journal Aquatic Toxicology.

“We saw a lot of changes during the exposure,” said lead author Sarah Alderman, a post-doctoral candidate at the University of Guelph, “from delayed hatching to increased mortality, increased developmental deformities, and changes in growth and energy stores in the fish.”

Alderman and her team reached their conclusions after exposing four different groups of eggs to four different concentrations of water-soluble diluted bitumen, then transferring them to clean water for eight months of observation.

“Almost 50% of the salmon exposed to the highest amount of diluted bitumen, or dilbit, died during the first two months after they were moved to clean water,” she told The Canadian Press. A control group that was not exposed to the substance had a mortality rate below 2%.

Alderman’s results build on her earlier finding that even very low levels of dilbit contamination in waterways reduce the odds that migrating salmon will “make it back to the rivers and streams of their birth to spawn,” CBC reports. The latest study release follows the Federal Court of Appeal’s decision to overturn the Trudeau government’s approval of the Trans Mountain pipeline expansion, partly on the finding that the “National Energy Board unjustifiably excluded the consideration of marine shipping of bitumen in its approval process.”

During the NEB hearings, First Nations pointed to “research and information gaps about a spill of diluted bitumen in a marine environment,” CBC recalls. “The Federal Court ruling said there was nothing in the approval process that showed the government addressed those concerns.”