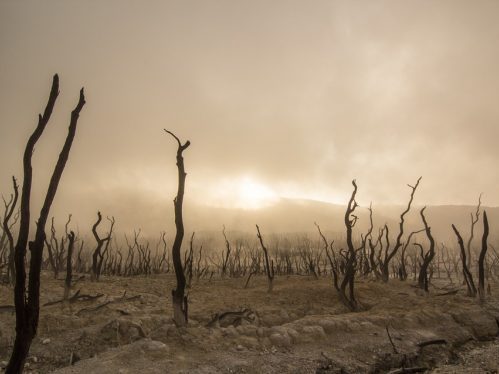 Climate shocks like droughts and flood have helped drive global hunger up to levels last seen a decade ago, leaving one out of nine people around the world undernourished, concludes the State of Food Security and Nutrition in the World report issued earlier this week by five United Nations agencies.

“Hunger afflicted 821 million people last year, the third annual rise since 2015, with most regions of Africa and much of South America showing worsening signs of food shortages and malnutrition,” The Guardian reports. “More than half a billion of the world’s hungry live in Asia.”

“If we are to achieve a world without hunger and malnutrition in all its forms by 2030,” the heads of the agencies wrote in the foreword to the report, “it is imperative that we accelerate and scale up actions to strengthen the resilience and adaptive capacity of food systems and people’s livelihoods in response to climate variability and extremes.”

The study identifies climate shocks as “among the key drivers” of the increase in malnutrition, along with conflict—which can also be driven by climate changes—and economic slowdowns. It was produced by the UN Food and Agriculture Organization, the International Fund for Agricultural Development, UNICEF, the World Food Programme, and the World Health Organization.

“What is alarming about this analysis is that climate variability and climate extremes now are contributing to the rise in hunger. Not just emergency levels of hunger, but chronic hunger,” said report editor and FAO senior economist Cindy Holleman. “We see this report as an early warning call that we need to accelerate and scale up climate resilience, especially in countries in Africa and Latin America that are most vulnerable.”

She added that “this is the beginning of a very serious situation. We have a target to end hunger by 2030, and we are not going to do that unless we are going to tackle new challenges—and the new challenges are climate extremes and variability.”

But the situation may already be worse than the five agencies convey. The study period for the report ended last year, so the results don’t include the summer of Northern Hemisphere heat waves, floods, droughts, and wildfires that is just now drawing to a close. But “the extreme weather we have seen this year is likely to have exacerbated the crisis,” said Robin Willoughby, head of food and climate policy at Oxfam GB. “A hotter world is proving to be a hungrier world.”

The UN found that 100 million people had to depend on humanitarian aid last year, and regions of the world that experienced serious climate extremes had more undernourished people.

“It is shocking that, after a prolonged decline, this is the third consecutive year of rising hunger,” Willoughby told The Guardian. “The inescapable fact is that climate change is now leaving people around the world without enough to eat.”