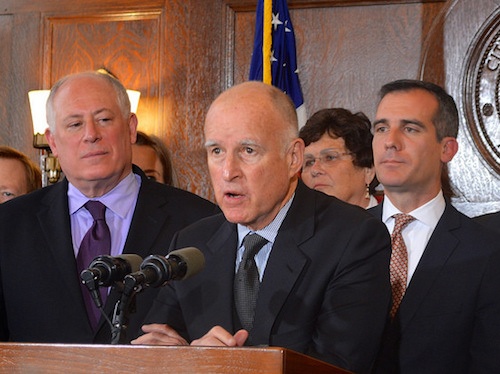 As delegates gather in California today for Governor Jerry Brown’s Global Climate Action Summit (GCAS), Brown’s legacy as a global climate leader could yet be tarnished by his state’s continuing status as the second-biggest oil and gas producer in the United States.

The Summit was intended as a catalyst for action as nations prepare for the all-important United Nations climate conference in Poland later this year, and as a capstone on the term-limited governor’s long career as an environmental and climate leader. While the first of those outcomes is already taking shape—and is even more important after the “uneven” result of last week’s UN-hosted negotiations in Bangkok—it remains to be seen how Brown’s own history will eventually be written.

“Let’s agree: Jerry Brown deserves real praise for his role as a first-generation climate leader,” writes 350.org co-founder Bill McKibben, in a late August post for The Nation. “As California’s governor, he helped shepherd the state to a place near the top of the green league standings, by reducing the demand for energy and producing more of that energy with renewables.”

But at the same time, “global warming is a timed test, one that now demands stronger responses. And the governor is flunking that test.” Few politicians stay ahead of the issues they espouse, preferring to stick with talking points that worked for them early on, McKibben acknowledges. “But boy, would it be nice if he proved the exception to the rule and used the final months of his governorship to help the world move to the next stage of the climate fight.”

In the months leading up to GCAS, Brown has been under pressure to reconcile his state’s continuing, profligate fossil production with its climate leadership. In May, Oil Change International reported that, while California was on track to save 430 million barrels of oil by 2030 by reducing vehicle consumption by 50%, its oil and gas permitting trends translated into an additional 560 million barrels extracted over the same period.

“We need to keep dirty fossil fuels in the ground to avert climate and health catastrophe, but California continues to hand out new drilling permits like candy,” said Kassie Siegel, director of the Climate Law Institute at the Center for Biological Diversity, one of the 15 organizations that endorsed the Oil Change report. “This devil-may-care approach to oil extraction threatens to sabotage not just our state’s climate progress, but the world’s. That’s why we’re demanding Governor Brown halt new drilling in California and create a just transition plan to phase it out as soon as possible.”

In The Nation, McKibben notes that Brown has approved about 20,000 new wells during his tenure as governor—including four times more offshore wells than the U.S. federal government has allowed in deeper offshore waters. To some extent, McKibben puts that down to a generational difference.

“Brown worked hard to cut energy use and to increase the use of solar panels,” he writes. “But at least since the start of the battle over the Keystone XL pipeline about a decade ago, environmentalists have added a new key strategy: To have any hope of meeting global targets, we also need to keep coal, oil, and gas in the ground. That’s why every new mine, well, pipeline, and terminal gets fought.”

“But not, apparently, in California,” McKibben notes. “In fact, every time the subject has come up, Brown has sounded testy, off his game—not even able to keep up with New York Governor Andrew Cuomo, who banned fracking across the Empire State. A year ago, when an activist dared interrupt his speech to shout ‘Keep it in the ground!,’ Brown’s reply was caught on video: ‘Let’s put you in the ground,’ he said.”

McKibben critiques the governor’s talking points against a managed phaseout of new drilling permits, noting that Californians of colour “who overwhelmingly inhabit the neighborhoods where Brown permits oil wells” would be the biggest beneficiaries if Brown moved the issue forward.

“That’s why so many environmental justice groups have come together to demand action: more than 800 signed on to a letter this summer asking him to take action.”

If he chose to, Brown could fight the fossil lobby “with more power than any other politician on the planet”: the state has the technical expertise and citizen support, and at age 80, Brown is “never running for office again, and in no further need of oil money” to help fund his campaigns.

“One would hope this would free him to act—even a limited announcement that he would phase out drilling within 2,500 feet of schools, hospitals, and homes would be a real start, one that would win him deserved acclaim,” McKibben concludes. But given the governor’s recent performance on this aspect of the issue, “perhaps we should be prepared to honour him as a pioneer in the early stages of this fight—not as a leader in its current and future battles.”