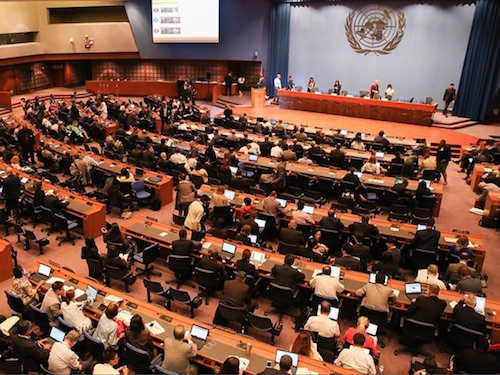 Nearly a week of climate negotiations ended in Bangkok Sunday with what civil society observers called “uneven” progress on the all-important “rulebook” that countries are to adopt to implement the 2015 Paris Agreement. With talks due to conclude just three months from now at COP 24 in Poland, diplomats have a monumental task ahead to hammer more than 300 pages of draft text into a final agreement, and to reconcile deep political differences that were still on display during the week in Bangkok.

Despite some progress in negotiations, “substantive issues on finance and differentiation, among others, still hang in the balance,” Climate Action Network-International warns, in its final assessment of the Bangkok meetings. “To reach an ambitious deal in Katowice, which includes a strong rulebook, finance, and stronger commitments to ambition by 2020, political leaders must talk to each in the next few months to infuse trust into climate discussions.”

While some observers from the global climate community were pleased that 195 countries had come up with an initial negotiating text as a basis for further discussions, others were alarmed at the slow pace of the talks—and at some of the specific elements of the eventual Paris rulebook that still seemed stalled.

“The negotiation text is not exactly a piece of art, but at least we now have a basis for making much needed compromises at COP 24,” said John Norbo, head of climate advocacy at CARE Denmark. “When ministers arrive at the COP in Katowice they must do their part of the job: increase mitigation, ambition, and make sure more finance is provided to poor people who suffer from the harmful impacts of the climate crisis. It is however very disappointing that no country seems to take on a leadership role and try to forge the compromises.”

“The outcome of the Bangkok climate talks was uneven, and leaves much work to be done over the next three months to assure a successful summit in Katowice, Poland this December,” said Alden Meyer, director of strategy and policy at the Union of Concerned Scientists. “On the core issues of forward-looking climate finance and the degree of flexibility developing countries should be given on the information and reporting requirements for national commitments under the Paris Agreement, negotiators were stalemated in Bangkok. It’s now up to the incoming Polish presidency and officials leading negotiations to find ways to bridge the deep differences on these issues and to secure agreement in Katowice on a robust, comprehensive package of rules to implement the Paris Agreement.”

“We have fortunately avoided going off the cliff edge. Governments have empowered the co-chairs to turn the progress made so far into a more solid basis for negotiations in Poland,” said Mohamed Adow, international climate lead at Christian Aid. “It is now vital for the co-chairs to change the course of the negotiations from diplomatic doldrums towards a win-win approach and craft middle ground options that the whole world can get behind at COP 24.”

“The Paris Agreement is on the brink,” warned Harjeet Singh, global lead on climate at ActionAid International. “Developed countries are going back on their word and refusing to agree clear rules governing climate finance. If they remain stuck in their positions and fail to loosen their purse strings, this treaty may collapse. We have a mountain to climb before the next climate summit this December. Finance ministers must now step in and deliver on the promises made in Paris.”

“These talks have been beset with tension and parties have wrestled with reaching a balanced proposal on the Paris rulebook,” said Taehyun Park, global climate political advisor at Greenpeace East Asia. “Progress has slowed, leaving the heavy lifting for COP 24. A leadership deficit is the root cause of this slow pace and needs to be immediately addressed.”

Three major concerns emerged from analyses circulating in the hours after the Bangkok meetings closed.

“As COP 24 President, it is Poland’s responsibility to ensure fair play and prevent big polluters from shifting the goal posts of the Paris Agreement,” Adow said. But to hit that standard, “Poland as the referee needs to get their head in the climate game. Otherwise someone else will need to step up and limit the damage to the negotiations and the world’s poorest people.”

“If the rulebook is the backbone of the Paris Agreement, then an ambition outcome is its heart and finance its lifeblood—let one fall into disrepair, and the whole body is in trouble,” said Jennifer Tollman, climate diplomacy researcher with consultancy E3G. “To make healthy progress on any, let alone all of these issues will require a significant step up in diplomatic outreach on [the part] of the incoming Polish Presidency and traditional bridge-builders like the European Union.”

While the Bangkok talks were under way, Teresa Anderson of Action Aid warned that human rights concerns could be swept aside in the urgency to arrive at an agreement—just about any agreement—in Katowice.

“There is growing concern among those of us who work with communities on the ground,” she wrote. “As we observe these negotiations, our fear is that the ‘rights-based approach’ to climate negotiations risks being overlooked, or worse, sacrificed, in the rush to agree text in time for December’s COP 24.”

That would be “short-sighted and, ultimately, counterproductive,” she said, at a time when “harvests are being disrupted, and almost every month a new disaster brings a new crop failure. Droughts are decimating crop yields. Changing water currents are disrupting fisheries. Typhoons are tearing up orchards.” With climate disasters already affecting the people who produce the world’s food, “none of us should sleep well at night when we think about what that is likely to mean for our food supplies in the future,” or for the nearly one billion farmers and fishers—80% of them women, in some parts of the world—who provide them.

As the talks drew to a close, Vijeta Rattani, senior researcher at India’s Centre for Science and Environment, raised serious questions about whether there’s time or political will for COP 24 to deliver the powerful outcome that will be needed to properly implement the Paris deal.

“It will be a mammoth task to have a robust and balanced rulebook that will reflect fair and equitable progress on all issues,” she wrote, “considering that there is precisely only two weeks of negotiating time for the final rulebook to be adopted. There is a question mark on the collective political will to deliver on the mandate of the Paris Agreement. The role of co-chairs and incoming Presidency becomes crucial in finding a way forward to help the Parties in streamlining the options before political decisions can be taken by the Heads of States at Katowice.”

Carbon removal is not enough to save climate