New Wind and Solar Installations Could Green the Sahara 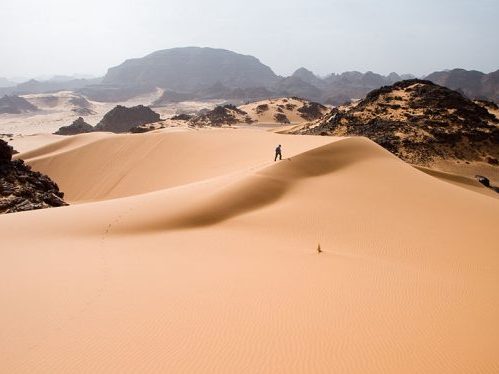 Installing big wind and solar farms in the Sahara Desert could make the famously (and increasingly) arid region much greener, according to a new modelling study published last week in the journal Science.

That’s because, in addition to being wind and sun catchers, the devices are quite literally rainmakers, reports the BBC.

Choosing a sparsely-populated region in the Sahara, researchers from the universities of Illinois and Maryland modelled what would happen if nine million square kilometres of the desert were equipped with wind turbines and solar panels.

After adding those feedbacks to the simulation, Li added, “our model results show that large-scale solar and wind farms in the Sahara would more than double the precipitation, especially in the Sahel, where the magnitude of rainfall increase is between 20 and 500 millimetres per year.” That would be enough to increase vegetation cover by about 20%.

The devices boost precipitation because “wind farms increase surface roughness, and therefore increase wind converging into low-pressure areas,” Li explained. “The converging air has to rise, making it cool off and moisture condense, which will lead to increased rainfall.”

Li attributed solar panels’ rainmaking ability to their dark surfaces, which “directly reduce the surface albedo [reflective effect of light surfaces such as snow], which leads to more solar energy absorption and surface warming, which in turn strengthens the Saharan heat low, leading to more rising air and precipitation.”

The study suggests the increase in rainfall will have a powerfully positive impact for the people of the Sahara and Sahel.

“The Sahara, the Sahel, and the Middle East include some of the driest regions in the world, while experiencing high growth of population and poverty, and our study has major implications for addressing the intertwined sustainability challenges of the energy-water-food nexus in this region,” he added.

For those puzzled by how increasing temperatures (even to make rain fall so that crops can grow) could possibly be a good thing in the midst of the climate crisis, the BBC reports that the heating impact of “all those turbines and panels” would be more than offset by the GHG emissions avoided.