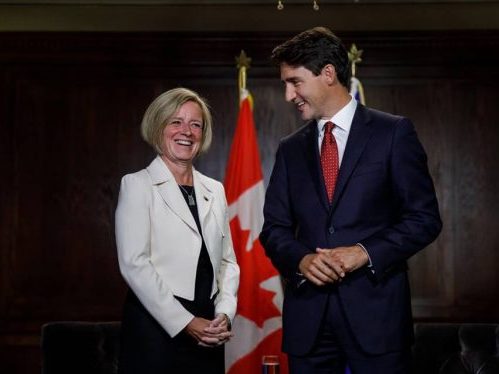 The federal government is considering new legislation or a Supreme Court of Canada appeal in its efforts to restart construction of the Trans Mountain pipeline expansion, less than a week after a blockbuster Federal Court of Appeal ruling stopped the C$13.8-billion project in its tracks.

“We’re looking at various options, including legislation, including appeals, and we’re looking at what we need to do to satisfy the court,” Trudeau told media in Edmonton Wednesday, ahead of a contentious meeting with Alberta Premier Rachel Notley. “We have to move forward on a path that takes community and environmental assessments into account.”

He added that Ottawa wants “shovels in the ground as quickly as possible”, in a way that satisfies the concerns raised in the appeal court decision.

Trudeau pointed to Canada’s festering trade dispute with the Donald Trump administration in the United States as justification for opening up new markets for the country’s fossil resources. “This pipeline project needs to get done and the only way it will get done is by doing it the right way,” he said. “Canadians understand how important it is to get our resources to markets other than the U.S. right now, across the Pacific.”

In New York, meanwhile, Suncor Energy CEO Steve Williams said his company would not expand any of its tar sands/oil sands production operations “until it becomes clearer when new pipelines will be ready,” Reuters reports. The statement appeared to contradict long-standing fossil industry claims that new pipeline capacity would be unrelated to any future increase in climate-busting tar sands/oil sands production.

“You will not see us approve those projects until we have more clarity on pipelines,” Williams told an investors’ conference hosted by Barclay’s Bank. “I would want to see actual, physical progress on the ground before I would commit.”

“Suncor is currently ramping up production of its new Fort Hills mine in the Alberta oil sands and is due to decide in late 2019 and early 2020 whether to expand production at existing facilities,” the news agency states, citing Williams. “Heavy oil production in Western Canada is expanding but construction of new pipelines has not kept pace, stranding supplies in the landlocked province” and deepening the discount producers must offer to get their bitumen to market.