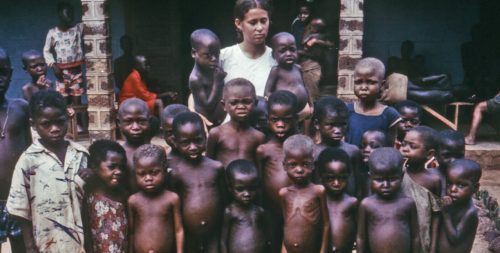 Higher carbon dioxide levels in the atmosphere don’t just mean a warmer world: they could also mean both shrunken harvests and a less nourishing diet.

LONDON, 5 September, 2018 – A greenhouse world could be a more malnourished one, trying to survive on shrunken harvests. Researchers have confirmed that as carbon dioxide ratios in the atmosphere double later this century, the protein, iron and zinc content of many of the world’s staple crops could dwindle by between 3% and 17%.

Since an estimated two billion people are already affected in some way by hunger or malnutrition, the consequences are alarming. An extra 175 million people could become deficient in dietary zinc – a vital trace element in plant foods. An additional 122 million people will no longer get enough protein.

And 1.4 billion children below the age of 5 and women of child-bearing age already live in regions where the prevalence of anaemia reaches 20%, and stand to lose 4% of their dietary iron intake.

Almost two thirds of all the world’s dietary protein is provided by plants, along with four-fifths of its dietary iron and more than two thirds of the dietary zinc.

“Decisions we are making every day – how we heat our homes, what we eat, how we move around, what we choose to purchase – are making our food less nutritious”

Human civilisation and human food staples – wheat, rice, maize, potatoes, fruit, brassicas, beans and nuts – evolved together, and for most of human history carbon dioxide ratios in the atmosphere hovered around 280 parts per million. But since the start of the Industrial Revolution, these have reached 400ppm.

Two US scientists report in the journal Nature Climate Change that they used computer simulations to look at the effect of extra carbon dioxide – the consequence of ever-increasing combustion of fossil fuels over the past 200 years – on the nutritional value of 225 different foods in the population of 151 countries around the planet. They settled on an upper limit of 550ppm of CO2 in the atmosphere by 2050 as their test case.

And they found that the prevalence and severity of nutritional deficiency would be increased worldwide, particularly in Africa, south and south-east Asia and the Middle East.

In just one country, India, an additional 50 million will start to suffer from zinc deficiency, 38 million will go short of protein and more than 500 million women and children will be at greater risk of anaemia and other diseases linked to insufficient dietary iron.

Other researchers have already made the same case using different approaches: they have repeatedly raised the alarm about the nutritional content of humanity’s favourite staples in a greenhouse world, made direct connections between carbon dioxide levels and plant protein productivity, and tested the hypothesis with common varieties of humanity’s most important food plant, rice.

More ominously, higher ratios of the greenhouse gas also mean a warmer world with greater extremes of heat, drought and rainfall: under such conditions plant toxins could become more dangerous, and yields for both fruit and vegetables and for staples such as wheat and maize could begin to fall.

Smaller harvests are likely to mean higher food prices: once again, those already poorest and most at risk of hunger and malnutrition will suffer.

It doesn’t have to happen this way: drastic and concerted efforts to limit global warming by switching to sun and wind power, and to accelerate development in the poorest parts of the world, could reduce the risk.

“Our research makes it clear that decisions we are making every day – how we heat our homes, what we eat, how we move around, what we choose to purchase – are making our food less nutritious and imperilling the health of other populations and future generations,” said Samuel Myers, principal research scientist in planetary health at the Harvard TH Chan school of public health in Boston, who led the research.

“We cannot disrupt most of the biophysical conditions to which we have adapted over millions of years without unanticipated impacts on our health and wellbeing.” – Climate News Network