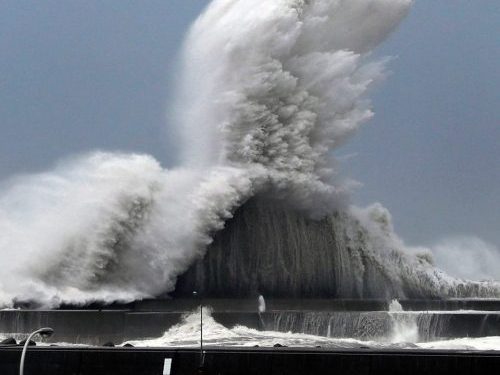 A fuel tanker weighing more than 2,500 tonnes slammed into the bridge that connects Izumisano City to a nearby airport as the city coped with Typhoon Jebi, the strongest storm Japan has seen in 25 years.

The fuel tanker was empty, and none of its 11 crew were injured, The Independent reports. But the bridge sustained serious damage, and the incident immediately caught the attention of some Vancouver residents concerned about the environmental hazards of a four-fold increase in tanker traffic, in the event that the C$13.8-billion (and counting) Trans Mountain pipeline expansion is ever completed.

“The boat had been anchored in Osaka Bay, but it was swept toward the bridge by the typhoon,” The Independent recounts. “Several other vessels, including salvage barges, were also swept away at Kobe-Osaka port after the weather snapped their mooring ropes.”

The typhoon killed six people and injured more than 90, and “television footage of the storm hitting the country showed waves pounding the coastline, sheet metal tumbling across a car park where cars were turned on their sides, dozens of second-hand cars on fire at an exhibition area, and a big Ferris wheel spinning around in the strong wind.”

Tides in some areas were the most severe since a previous typhoon in 1961.