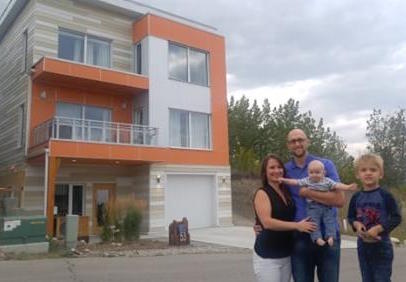 A home in northwest Calgary has become the first in Alberta to earn the Passive House certification, a gold standard for sustainability building for homes that typically consume up to 90% less energy than a typical new building.

“Ania Kania-Richmond says special, energy-efficient features heat her family’s nearly 2,000-square-foot home in Rocky Ridge without a furnace, despite Calgary’s frigid winters,” CBC reports. “Kania-Richmond says the four-year process from lot purchase to move-in wasn’t always easy—but it has been worth it to live a more sustainable lifestyle.”

“Behaviour change is really hard. We’re all really comfortable in our big houses and big cars,” she said. “I would never critique somebody’s lifestyle choices, but I do think that we need to recognize that maybe there’s a different way of doing it. Maybe there’s a better way of doing it.”

CBC lists the features that make a passive house different: the outer walls are twice as thick as a “typical build”, concrete floors serve as a thermal mass to absorb, then release passive solar heat, and the home’s foot-deep window sills “frame airtight, triple-pane glass” imported from Germany, where the Passive House Institute is located.

“They’re very, very well insulated, so in the wintertime, if you sat beside my wall or beside my windows, you’d never know the difference,” Kania-Richmond said. “There’s absolutely no draft.”

As for the indoor temperature, “sun comes in through our windows and heats the inside environment,” she explained. “That’s all passive solar energy is. The thermal mass enhances how much you capture that heat.”

The home has needed back-up electric radiators “maybe 10 times, for an hour at a time,” in the two years since Kania-Richmond and her family moved in, she said. In exchange, the family pays no heating bills.

While the home is the first to receive Passive House certification, CBC says it’s on one of 25 lots in Calgary’s EchoHaven development that were developed with no natural gas connections. “All homes in the development must be 30% more efficient than the newest Alberta building code requirements,” the national broadcaster reports. “They’re also expected to use a lot less energy than regular build homes, give off no greenhouse gas emissions, and harvest rainwater.”

Kania-Richmond’s neighbour, Shannon Sherman, lives in what she calls an “almost passive home”. She told CBC she’d initially been nervous about owning a structure with no natural gas heating, but was drawn to a neighbourhood whose developer had preserved more than 60% of the natural landscape.

“I’ve lived in Alberta my whole life, so we were very concerned that we could not actually have a home in Alberta without a furnace, and it’s turned out you actually can,” she said. “It was very much a leap of faith,” but “we did our research and we’re really happy we did.”

Kania-Richmond, Sherman, and their neighbours aren’t the only ones in Calgary looking at new approaches to building design. CBC reports that local utility Enmax recently received a C$1.4-million federal infrastructure grant to look at tapping the renewable energy available in the city core. One scenario would have Enmax buy electricity from solar panels atop Calgary’s downtown office towers.

“Many big cities use specialized so-called secondary networks to supply reliable power to urban communities. Right now, those specialized power grids are locked down to typically only send power one way,” from grid to consumer, CBC explains.

At present, “any home or business on that secondary grid that generates its own energy with solar panels or cogeneration machines needs special controls in order to send any excess power back into the system,” CBC notes. “Those controls stop their power generators from feeding electricity at any time, a defence that helps the grid stay reliable. But Enmax says the cost of those protections is prohibitive, so they’re rarely used. Instead, that green energy is often wasted.”

“What this is going to allow customers to do is to be able to generate electricity on their buildings in a downtown core, use what they need, but if they have excess, then they can put it back onto the grid,” said Enmax President and CEO Gianna Manes. “We can’t do that with our technology today.”

Cancelling Cap-and-Trade Will Boost Ontario’s Emissions as Much as 30 Coal Plants, Ottawa Warns