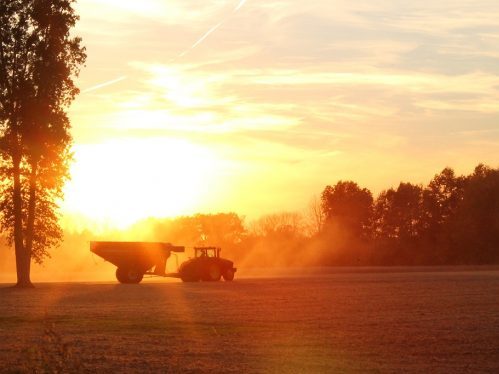 With the northern hemisphere in the midst of an epic heat wave this summer, the Climate Desk collaboration is pointing to the 130 million outdoor workers across the United States—from farmworkers to construction workers—who are at serious risk due to a lack of heat stress protection.

“When farmworkers are out picking tomatoes or spraying pesticides in the high heat, they can be exposed to heat-related illnesses, some of which can lead to death if left untreated,” Mother Jones magazine and Grist report, citing research by Public Citizen. The Washington-based advocacy group says nearly 70,000 workers were seriously injured from heat between 1992 and 2006, and 783 of them died.

Mother Jones adds that the numbers could be even higher, since an estimated 47% of farmworkers are undocumented immigrants—which means that, especially in Donald Trump’s America, “fear of deportation can lead to a reluctance to report incidents or even seek medical attention.” The health impacts they face range from rashes and cramps to kidney or brain damage due to heat stroke.

“If steps aren’t taken to cool the body down immediately, extreme heat can also lead to death,” writes MoJo reporter Nathalie Baptiste. “The long-term effects have not yet been firmly established, but there is emerging evidence that working outdoors in extreme temperatures can also lead to chronic kidney disease.”

In 2005, California passed the country’s first standards to protect workers from heat stress. But in 2012, the United Farm Workers of America sued the state on behalf of 28 farmworkers who died of heat-related illnesses over the previous seven years.

“In farm working, there’s a huge number of migrant laborers, immigrants, and people who don’t speak English,” Arkush said. “And companies feel like they can get away with exploiting those people.”

At least one farmworker who died in 2008, 62-year-old María de Jesus Bautista, apparently felt pressure to keep up with her co-workers—and to make enough money in a system based on piece rates. “Some of the ways in which workers are at risk is just the pace of work,” explained Virginia Ruiz, director of occupational and environmental health at Farmworker Justice. “When workers are paid by the amount they pick, there’s a reluctance to take a break.”

As temperatures rise, Mother Jones says it’ll be up to the U.S. government (well, some future U.S. government) to step in. Heat-related illness “is entirely preventable,” Ruiz said, “but I think we’re going to see them more frequently as we have these spikes in temperature across the country.”