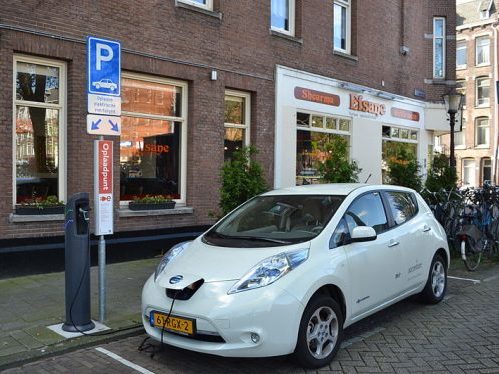 Industry reports are beginning to confirm long-standing rumours that the LG Chem battery that powers the range anxiety-busting Chevy Bolt will soon be finding its way into electric vehicles manufactured by Nissan and Hyundai.

“When you have a bigger battery, with more capacity, it just opens up the door to be able to have more output,” said Nissan Director of EV Marketing and Sales Strategy Brian Maragno. “A larger capacity battery lends itself towards two things. One is obvious: more range. The other one, which is maybe a little less obvious, but equally as true, is additional horsepower and output,” he told participants at a recent promotional event.

“This suggests that the 2019 Nissan Leaf will get the same powertrain made by LG Chem for the Hyundai Kona Electric,” said Pedro Lima of the PushEVs blog, in a post cited on CleanTechnica. “All of this starts to put the 2019 LEAF in competitive territory with the Tesla Model 3 and certainly the Chevy Bolt,” CleanTechnica states, though it still falls short of the fast-charging capacity and some of the “wicked cool” but not strictly functional features available in the Model 3.

The added range that Korean industrial giant LG seems poised to bring to the Leaf and the Kona will land well with anyone who’s studied EV performance specifications as a potential buyer with range anxiety. In a 2016 analysis on Green Car Reports, the LG battery emerged as the key element of GM’s effort to deliver the 2017 Bolt as a 200-mile/320-kilometre EV. [Editor’s note/acknowledgement: This isn’t a product placement, but it’s written based on household experience.]

At the time, Green Car Reports framed the Bolt EV powertrain as the result of a design and production collaboration between the two companies. “LG Chem—which supplies lithium-ion cells from Holland, Michigan for the Chevrolet Volt and Spark EV, and the Cadillac ELR and CT6 Plug-In Hybrid—designed, engineered, and tested the Bolt EV’s battery system to performance and packaging specifications supplied by GM,” the blog stated. At one point or another, four LG units—LG Chem, LG Innotek, LG Display, and LG Electronics—had a hand in different components of the car.

“In South Korea, LG Electronics is investing more than US$250 million in a Korean facility to support development and manufacturing of components for the Bolt EV, most notably the electric motor,” wrote Senior Editor John Voelcker. “It will also manufacture the car’s power electronics modules to specifications mandated by GM.”

“We intend to do [EVs] better, more efficiently, and more cost-effectively than anybody else can,” GM’s head of global product development, Mark Reuss, said at the time. He described the GM-LG partnership as “a different kind of [Original Equipment Manufacturer]-supplier relationship”, and an “expansion” of a collaboration that began in 2008.

Lithium prices roughly doubled from 2016 through early 2018, Greentech notes, and as recently as April, the Moody’s ratings agency reported that demand was still rising. More recently, though, a minerals industry bulletin is attributing falling lithium carbonate prices to “sluggish demand from downstream buyers”, with industry analysts at Macquarie Research warning that the lithium market was “sleepwalking into a tsunami of oversupply.”

The underlying issue is that lithium carbonate prices in China, the world’s largest consumer of the substance, have fallen 44% since December 2017. “While low lithium prices should be a good thing for the lithium-ion battery industry, some analysts worry that price drops will discourage new investments in production facilities and thus create shortages once demand picks up,” Greentech states.

But at least two industry officials pushed back on Macquarie’s dire assessment.

“There will be projects built,” said Robert Mintak, CEO of Vancouver-based Standard Lithium, although “it’s not going to be easy either way.”

“The lithium chemicals end-use product is in short supply,” added Argosy Minerals Managing Director Jerko Zuvela. “There’s not enough of it and you can’t produce it fast enough.”

Electric Bus Fleets on the Rise Despite Koch Network Attacks