Electric Bus Fleets on the Rise Despite Koch Network Attacks 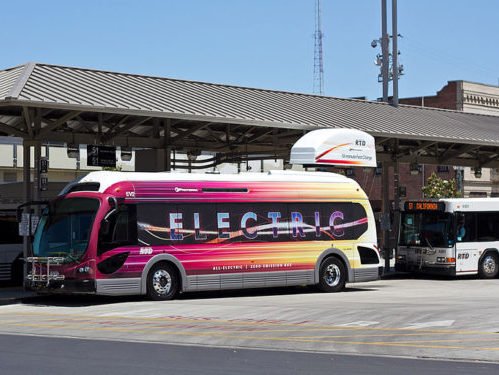 Electric buses are taking to the streets the world over, and increasingly in the United States, even as Koch-fueled anti-transit vitriol spews out in defiance of clear proof that green buses are a mature, reliable, inexpensive technology.

“Electric buses are replacing existing diesel-fueled fleets at an accelerating rate, and the transition to battery-powered buses is outpacing even the most optimistic projections,” Ecowatch reports, with China “adding about 9,500 electric buses every five weeks,” according to Bloomberg New Energy Finance (BNEF).

Ecowatch adds that, “as China leads the way and North American and European municipalities follow suit, analysts expect this momentum to accelerate and predict 80% of the global municipal bus fleet to be electric by 2040.” In the United States alone, Seattle intends to purchase 120 electric buses by 2020, with full electrification of its fleet by 2040, while Los Angeles and New York intend to achieve the same by 2030 and 2040, respectively.

All of which is grim news for Big Oil. In 2018 alone, e-buses “will lower diesel consumption by 233,000 barrels per day,” BNEF reports, while the general shift from internal combustion to electric vehicles will ultimately displace 7.3 million barrels of oil per day.

With numbers that grand, notes Ecowatch, it’s hardly surprising to find “commentators and organizations with ties to the Koch network and the oil industry” in full hue-and-cry against electric buses, recycling tired myths about their cost and reliability.

Ecowatch points to a series of recent op-eds in the pages of the Washington Examiner, all by authors with close ties to the Koch network. Eschewing reasoned argument buttressed by fact in favour of cherry-picking, non-sequiturs, and dog-whistles, the posts set out to discredit a flourishing, post-carbon industry. “They don’t run, they are expensive, and they’re Chinese,” wrote one of the Koch-affiliated authors, in an Examiner piece attacking the Los Angeles transit system.

For anyone interested in actual facts about e-buses, Ecowatch directs readers to a May 2018 report from the U.S. Public Interest Research Group and Environment America. It points to the “solid reasons” behind a global trend that will see the number of e-buses on the road “more than triple by 2026” to make up “nearly half of the worldwide city bus fleets”. Citing the report, Ecowatch notes that electric buses “are better for public health (reducing local air pollution from burning diesel), better for the climate (increasing efficiency and reducing reliance on fossil fuels), and make economic sense in terms of their full cost of moving passengers, when factoring in maintenance and fuel cost savings.”