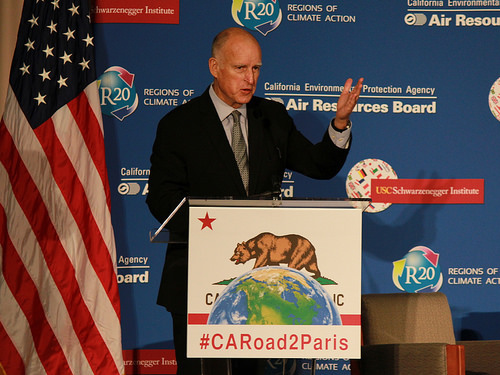 Pointing to what Governor Jerry Brown calls an “apocalyptic threat”, a new report and call to action paints a dire picture of California’s future if the greenhouse gas emissions responsible for climate change are not brought under control.

“Rising temperatures could lead to up to 11,300 additional deaths in 2050,” The Guardian reports, citing Monday’s release of California’s Fourth Climate Change Assessment. “By 2100, without a reduction in emissions, the state could see a 77% increase in the average area burned by wildfires. The report also warns of erosion of up to 67% of its famous coastline, up to an 8.8°F (4.9°C) rise in average maximum temperatures, and billions of dollars in damages.”

“These findings are profoundly serious and will continue to guide us as we confront the apocalyptic threat of irreversible climate change,” Brown tweeted.

“The good news is that it’s not ‘here’s the dire impact’, but ‘here’s some ways to mitigate the dire impacts’. It should give people some hope,” said Robert Weisenmiller, chair of the California Energy Commission, one of the three agencies behind the report. But “it really forces you to think through what do we do about the more elderly—the more endangered,” he added. “How do we protect them during these intense heat periods?”

California’s “2006 heat wave killed over 600 people, resulted in 16,000 emergency department visits, and led to nearly US$5.4 billion in damages,” the report states. “The human cost of these events is already immense, but research suggests that mortality risk for those 65 or older could increase tenfold by the 2090s because of climate change.”

The researchers note that “cooling mechanisms such as air conditioners can help mitigate the effects of intense heat waves, but increased electrical consumption can also drive up the emissions responsible for climate change in the first place,” The Guardian states. “And the double threat of wildfires and increased energy consumption can endanger a power grid vital in a crisis.”

The Guardian says the assessment covers a range of climate mitigation solutions, from land use planning to reduction of the state’s GHG emissions, just under half of which come from transportation. (In the lead-up to Brown’s Global Climate Action Summit September 12-14, the climate community has also been pointing to the Golden State’s golden opportunity to phase out emissions from its oil and gas sector, the second-largest in the U.S.—Ed.)