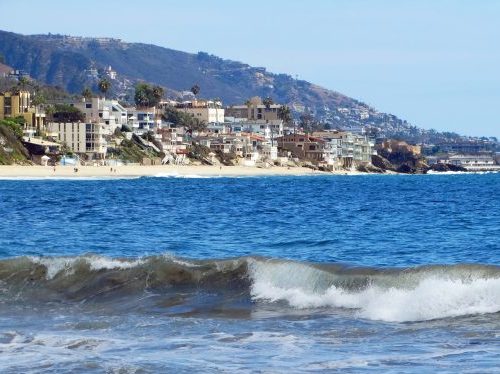 The California Coastal Commission has voted unanimously to force a Laguna Beach couple to tear down a sea wall that protects their mansion, while gradually destroying a nearby public beach.

The vote comes in the wake of an extended battle between city officials and Jeffrey and Tracy Katz, who insist the sea wall is necessary to protect their multi-million-dollar home from storm surge and rising sea levels. City officials responded with the “certain knowledge” that “sea walls can obstruct the natural flow and replenishment of sand, leading to smaller and smaller beaches until the sand disappears altogether,” the Los Angeles Times reports.

Built in 2005, after an emergency permit was issued by the commission in the wake of a series of severe storms, the 80-foot-long sea wall was intended only as a temporary measure, to be torn down the “next time ‘new development’ occurred,” writes the Times.

Just what constitutes such development has been a key point of contention, with the Katzes’ lawyer Steven Kaufmann “citing past permits and city codes” to claim that “the sea wall did not have to come down until the house underwent a ‘major remodel’—which he argued requires demolition of at least 50% of the actual frame.”

In a “preemptive lawsuit” against the commission earlier this year, the Times notes, “Kaufmann said threats over the sea wall ‘have had a devastating impact on the value and marketability of the residence,’ hindering the owners’ ability to rent the property for US$70,000 per month or sell it for its appraised price of $25 million.”

For Robert Moddelmog, an enforcement analyst for the commission, it’s the healthy future of the beach that matters. He said he and other officials had been forced to bring the matter before commissioners “after numerous attempts to get the Katzes to stop new construction.”

“In the end, it’s the public who loses if the Katzes’ violation remains in place, especially the next generation of beachgoers,” he told the Times “We have worked hard to craft a proposal that still allows the Katzes to apply to retain the portions of the home that do not need a sea wall, and to modify the house consistent with the law.”

The commission’s ruling against the sea wall was not a snap decision, with members “examining the hundreds of pages of photos, letters, and reports—even looking up the dictionary definition of the word ‘sand’” at one point in their deliberations, notes the Times. But the behaviour of the Katzes themselves was apparently a deciding factor, with commissioners declaring themselves “appalled by how far the owners went to avoid the commission’s oversight.”

In an earlier attempt to “get the owners to work with the state to find a way to save both the home and the beach,” the paper states, commission staff had suggested a $500,000 penalty and a one-year deadline to demolish the wall. Now, the commission is demanding immediate demolition and levying a $1-million fine, due in full within 60 days.

“The sea wall needs to come down immediately,” Commissioner Donne Brownsey told the Times. “This case is important in and of itself, but it’s also important as a harbinger of the issues that we’re going to have to face because of sea level rise, because of the certain knowledge we now have that sea walls are destructive to our beaches.”