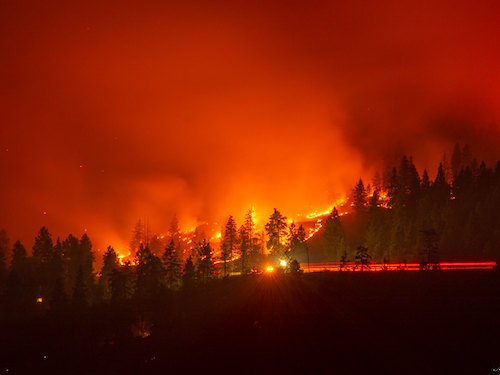 With nearly 600 wildfires burning across British Columbia, and smoke so thick in Prince George that it blotted out the sun, it was “absurd” for the federal cabinet to meet in Nanaimo and leave climate change off its meeting agenda, National Observer Publisher Linda Solomon Wood argued in a commentary last week.

“Next week, the Cabinet is heading to Nanaimo, BC for meetings focused on our plan to keep growing the economy and creating good, middle class jobs,” Prime Minister Justin Trudeau tweeted August 14. The initial news advisory “made no mention of climate policy,” Solomon Wood notes. “Even while British Columbia is burning.”

With “evacuations, damaged health, Beijing-like fog, nightmarish infernos” revealed as the “new normal”, Solomon Wood says it’s tempting to default to dark humour. “But dark humour isn’t going to solve things. Reducing global warming is.” With scientists’ warnings of climate instability now coming true, “those of us breathing the smoke in B.C. can only shake our heads and hope that tomorrow, or soon, the winds will shift and climate change will take the central position on this cabinet’s agenda.”

B.C. Premier John Horgan echoed one part of Solomon Wood’s message during a tour of Prince George yesterday morning with federal Defence Minister Harjit Sajjan. “We’re concerned—all of us— that this may be the new normal,” Horgan told media.

“From flood to fire to flood and then again to fire,” he added. “And we have had two states of emergency. That’s unprecedented.”

“Smoke as far as the eye can see. Almost every region of BC has been touched by these wildfires in some way,” he tweeted. “Feeling ever grateful for the tireless efforts of the people across BC working to keep communities safe from these #BCWildfires.”

“Our thoughts are with the first responders, the firefighters and the residents who are struggling through the wildfires that are raging across the province,” Trudeau said later in the day in Nanaimo. “Obviously, this is something that is very much a topic of conversation that we’ll be engaged in.” But there was no indication that conversation was getting at the root cause of the problem.

On Monday night, meanwhile, “fire officials painted an alarming picture of three huge, raging wildfires racing through an area of central B.C., west of Prince George,” CBC reports. With some residents defying evacuation orders in a community that relies on ferries for transport, incident commander Pete Lang “said he hoped the meeting would help dispel rumours and misinformation being spread on social media and help residents make an informed decision about what to do.”

Fire behaviour specialist Dana Hicks warned that trees killed by past mountain pine beetle infestations were now drier than plywood, creating a level of hazard that firefighters won’t be able to control.

“The intensity that’s putting off; we can’t put firefighters near it, water’s no good,” Hicks said. Which meant that “these fires will be free burning [Tuesday],” he added. “Nothing will be able to save us tomorrow. The fires are going to move.”

The Vancouver Sun reports that Metro Vancouver and the Fraser River Valley are seeing “terrible air quality” and a “massive surge in visits to doctors and in prescriptions to treat lung ailments” after the first week of a record-long continuous air quality advisory.

“In some areas of the province such as the north shore of Vancouver, authorities expect a whopping increase in physician visits,” the paper reports, citing B.C. Centre for Disease Control environmental health scientist Sarah Henderson. “Computer modelling shows a 120% increase in daily physician visits and an 80% rise in the number of asthma prescription medications dispensed at pharmacies.”

The Sun adds that this year’s forest season “has already claimed enough forest to cover 10 Torontos,” while Daily Hive is out with a map that shows the spread of B.C. wildfire smoke across Canada.