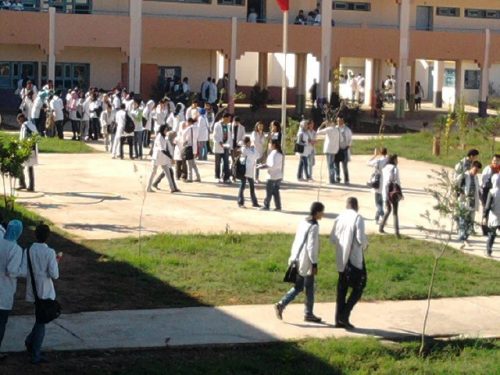 A plan to green the schoolyards of Paris will make local children happier, promote social cohesion, and may even help cool the City of Lights as it faces epic hot summers—if the plan itself can survive a widespread psychological lockdown resulting from repeat terror attacks.

On a June morning last year, The Guardian reports, the temperature in the courtyard of École Riblette, a primary school on the fringes of Paris, hit 55°C. Fast forward a year, and the school has become “a guinea pig for Project Oasis, a plan to convert the city’s concrete schoolyards into ‘islands of cool’.”

If all goes to plan, the paper reports, “all of Paris’s 800 schools will be transformed into green spaces by 2040,” using green walls, planters, and “expanded areas of shade.”

None of this is controversial, but Paris Chief Resilience Officer Sébastien Maire wants to go much further, welcoming vulnerable people into these newly-verdant patches of Paris during heat waves, and eventually the general public, too.

“By 2050, we’ll have 800 cool spots in the city using school infrastructure,” he told The Guardian—a far better option, he added, than the current practice of relocating people to air conditioned supermarkets and the naturally cool sanctuary of churches.

Lina Liakou, Europe regional director at the Rockefeller Foundation’s 100 Resilient Cities, praised the Oasis initiative, saying that greening the schoolyards will not only “address the environmental challenges, but also improve social cohesion and create a better environment for the people around them.”

So far, however, “opening up Paris’s fortress-like schools to everyone is not an easy pitch in a city that remains on high alert” in the wake of a number of devastating terror attacks, The Guardian notes. But “Maire is undeterred,” pointing out to those who oppose his inclusive vision that “heat waves have killed many more people in France than terrorism has: 580 people died in a single week of heat last year, and the European heat wave of 2003 killed 14,800.”

He also argues that reconceiving infrastructure in ways that foster community “is an essential part of making Paris more resilient to terrorism.”

And then there is the evidence that a greener Paris will be a cooler one. A 2012 simulation of the 2003 heat wave “found that turning every bit of bare land in the city of Paris into green space, including half of all pavements wider than 15 metres, could bring heat wave temperatures down by three to five degrees during the day,” The Guardian notes.

Then again, “that’s only if more than a thousand hectares of land turn green in the next few decades,” the paper adds. All the schoolyards of Paris only add up to about 80, and not all of them are in line to be greened: “École Riblette is keeping two of its yards asphalted so students can play sports.”

Even so, vegetation in schools is still “one step towards putting more vegetation in the city, which could have an overall microclimate effect and cool the entire city,” said Vincent Viguié, a research scientist at the International Research Centre on the Environment and Development. But “even the best-case scenario isn’t good enough to take on Paris’s rapidly warming climate,” he added. “It’s nice, but it’s not sufficient.”