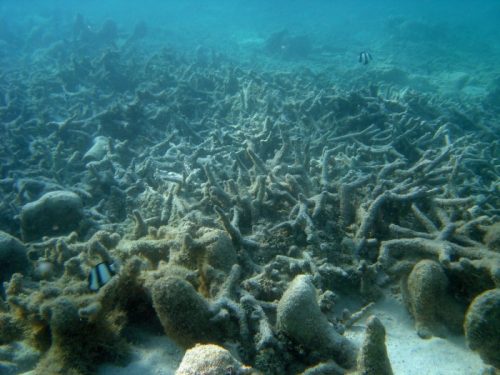 Limiting average global warming to 1.5°C above pre-industrial levels could cut the increased frequency and intensity of marine heat waves by more than half, according to the lead author of a new paper that shows extreme heat pushing ocean organisms and ecosystems “to the limits of their resilience and even beyond”.

The study in the journal Nature concluded that marine heat waves could become 41 times more likely by 2100 if average warming is allowed to hit 3.5°C, lead author and University of Bern ocean modeller Prof. Thomas Frölicher told Carbon Brief. And 3.5°C “is predicted to result from current national policies for the reduction of global carbon emissions”.

Based on a review of 12 global climate models, the study team concluded that marine heat waves have “already become longer-lasting and more frequent, extensive, and intense in the past few decades,” Frölicher added. By 2100 under a 3.5°C scenario, “heat waves that were likely to occur once every 100 days in the pre-industrial era could occur once every three days,” Carbon Brief notes. “Additionally, the average area covered by a heat wave is expected to be 21 times larger, and each event is expected around 100 days longer.”

At the Paris Agreement’s upper target of 2.0°C, the number of marine heat wave days per year would still be 23 times higher than pre-industrial times. At 1.5°C, they’d be 16 times more frequent, cover only one-quarter of the geographic area in the 3.5°C scenario, and would not last as long.

While ocean heat waves have not been well studied to date, Frölicher said a large increase would have “severe and long-lasting impacts” on marine life. “So far, our understanding of the impacts of marine heat waves on marine ecosystems has been gained opportunistically following a few recent events,” he noted. But “the warm blob in the Pacific in 2013-2015 caused increased mortality of sea lions, whales, and seabirds. In addition, a coast-wide bloom of toxigenic diatom [algae] was observed, which resulted in elevated toxins in marine mammals.”

On land, as well, “the heavy rain associated with the Peruvian marine heat wave in 2017 triggered landslides and flooding, which resulted in a death toll of several hundred, widespread damage to infrastructure and civil works, and significant economic losses.”

University of Washington PhD student Hillary Scannell, who was not a member of the research team, noted that there’s still time to avert the worst effects in the modelling.

“Although these types of studies usually have a doomsday ending, it is important to remember that these projections are dependent on the degree of expected warming,” she told Carbon Brief. “Curbing CO2 emissions now would certainly help steer us away from catastrophic ecological damage in the future.”