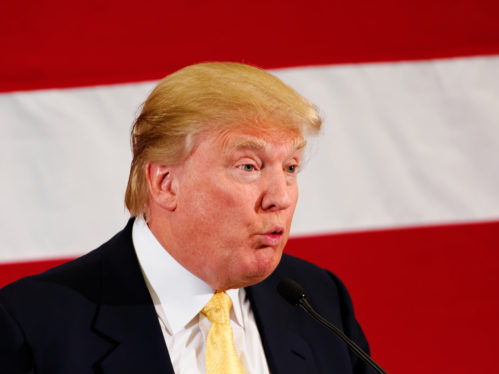 The Trump White House is about to unveil a replacement for President Barack Obama’s Clean Power Plan that would devolve regulatory decisions to state governments and release dramatically more carbon dioxide to the atmosphere. But at least one report says the administration’s “fuzzy math” could be the new plan’s undoing.

The new strategy, which Trump could release as early as Tuesday on a visit to West Virginia, would “empower states to establish emission standards for coal-fired power plants rather than speeding their retirement—a major overhaul of the Obama administration’s signature climate policy,” the Washington Post reports.

“The Environmental Protection Agency’s own impact analysis, which runs nearly 300 pages, projects that the proposal would make only slight cuts to overall emissions of pollutants—including carbon dioxide, sulfur dioxide and nitrogen oxides—over the next decade. The Obama rule, by contrast, dwarfs those cuts by a factor of more than 12.”

The administration says the proposal would cut carbon emissions 0.75 to 1.5% from 2005 levels by 2030, the equivalent of taking 2.7 to 5.3 million cars off the road, the Post states. “By comparison, the Obama administration’s Clean Power Plan would have reduced carbon dioxide emissions by about 19% during that same time frame. That is equivalent to taking 75 million cars out of circulation and preventing more than 365 million tonnes of carbon dioxide from entering the atmosphere.”

Smog-producing sulphur dioxide and oxides of nitrogen would be reduced by 1.0 to 2.0%, compared to 24 and 22%, respectively, under the Obama plan.

“These numbers tell the story, that they really remain committed not to do anything to address greenhouse gas emissions,” said Joseph Goffman, a CPP architect and former associate assistant administrator for climate in the EPA’s Office of Air and Radiation, now executive director of the Environmental Law Program at Harvard Law School. “They show not merely indifference to climate change but, really, opposition to doing anything about climate change.”

National Rural Electric Cooperative Association CEO Jim Matheson said the revision will “provide electric co-ops the certainty and flexibility they need to meet their consumer-members’ energy needs.” Co-op members generate 41% of their electricity from coal, and the CPP “would have resulted in stranded assets and stranded debt, significantly increasing electricity costs for many consumers,” he added.

The EPA estimates the plan could affect 300 operating power plants, with “enormous implications for dozens of aging coal-fired power plants across the country,” the Post writes. It would give companies “an incentive to keep coal plants in operation rather than replacing them with cleaner natural gas or renewable energy projects.”

But Politico reports the Trump team built the new plan on cost-benefit calculations that may not survive the court challenges it will inevitably face.

The administration proposal “is expected to downplay the money that people and businesses would save from using less electricity, a key feature of the Obama-era greenhouse rule for power plants,” the Washington Beltway publication states. “People tracking the issue also expect that the agency will count only a fraction of the improvements in public health from reduced smog and soot pollution, and won’t consider any benefits from slowing climate change outside the U.S.”

The Obama administration “had estimated that benefits from its 2015 rule would outstrip costs—$26 billion to $45 billion—by 2030,” Politico notes. “Supporters of the Obama version say those net benefits could be even greater now, because states are on track to meet the climate goals and the costs of clean energy have continued to plummet. And they warn that repealing the regulation could keep older, more expensive coal-fired power plants in operation, adding to consumers’ costs.”

“They are cooking the books on technical analysis to try to justify preconceived conclusions that these regulations are bad,” said David Doniger, senior strategic director of the Natural Resources Defense Council climate program.

“Emissions are going to go up, and I don’t mean from where they would have been under the Clean Power Plan, but relative to the trends now,” said Clean Air Task Force Advocacy Director Conrad Schneider. “This is to put the thumb on the scales and bring coal back.”

Environmental lawyer Sean Donahue predicted a court would be “very skeptical” of any appearance the EPA was trying to dodge its regulatory responsibility for greenhouse gases, though the outcome of any court challenge would depend on the details of this week’s power plant proposal.