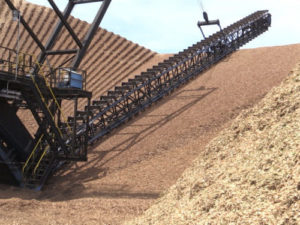 Relying on biomass with carbon capture and storage (BECCS) to keep average global warming within 1.5°C could release more carbon from the land than it sequesters from the atmosphere, according to a new analysis in the journal Nature Communications.

BECCS “is, perhaps, the most prominent of the various negative emissions techniques,” writes Dr. Anna B. Harper of the University of Exeter, in a guest post for Carbon Brief. “There are many attractive features, since this technology would provide energy—thus reducing our need for fossil fuels—and remove CO2 from the atmosphere at the same time.”

But “the full carbon cycle impacts of large-scale deployment of BECCS are not well studied. And, before now, no studies have looked at these impacts specifically for a scenario that could meet the 1.5°C target,” she warns. The new analysis determines that, instead of relying on BECCS, “protecting and expanding forests could be more effective options for meeting the Paris Agreement.”

To reach that conclusion, Harper and her colleagues looked at the one to two billion tonnes of carbon per year that could be sequestered through reforestation and growing new forests (afforestation), the increases in biodiversity and soil carbon that could result from some biofuel cultivation, and the essential role of global food production in driving land use, all based on models of different pathways to the 1.5° and 2.0°C targets in the Paris Agreement.

“Removing trees to plant biofuels as a way of mitigating climate change clearly seems counterintuitive,” she writes. “So we looked more closely at the effectiveness of the land use patterns in the two scenarios,” calculating the carbon stored in plants and soils under different climate scenarios and the mitigation potential of BECCS, then comparing that result against natural sequestration in the forests and soils that would be replaced by biofuels.

“Overall, we found that in a majority of the areas where forests would be replaced, more carbon was stored by keeping the forests than with employing BECCS,” Harper states, based on two key statistics—the volume of bioenergy crop produced per hectare, and changes in land use emissions under a BECCS scenario.

“Forests accumulate and store carbon in vegetation and soils and this is lost when forests are converted to crops,” she explains. “We found that this had a very big impact on the net carbon balance of land converted from forest to bioenergy crops. In high latitudes, for example, significant losses of soil carbon meant the ‘payback’ time for the carbon lost in replacing forests with BECCS could be more than 100 years. This means we also need to carefully consider where BECCS is implemented.”