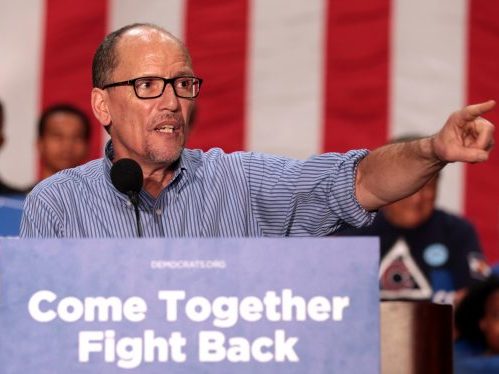 After unanimously adopting a resolution last June to refuse campaign donations from fossil companies, political action committees, and employees, the Democratic National Committee executive abruptly reversed course Friday, after trade unions cast the ban as “an attack on the working people in these industries.”

The updated resolution, sponsored by DNC Chair and former Obama labour secretary Tom Perez, says the party will accept contributions from “workers, including those in energy and related industries, who organize and donate to Democratic candidates individually or through their unions’ or employers’ political action committees.”

It added that Democrats wanted “to support fossil fuel workers in an evolving energy economy.”

Perez said the party had to “draw the line that we are indeed a party of a big tent where all working people are welcome. We’re not a party that punishes workers simply based on how they make ends meet.” At the same time, “we remain committed to the Democratic Party platform, which states unequivocally our support for combating climate change.”

DNC member Christine Pelosi, a co-author of the June resolution, tried to amend Perez’ resolution by deleting the words “or employers’ political action committees,” as part of the party’s “commitment to overturn[ing] Citizens United and banning corporate PAC money.” After the amendment failed on a 28-4 vote, Perez’ motion passed 30-2.

“I am furious that the DNC would effectively undo a resolution passed just two months ago just as the movement to ban fossil fuel corporate PAC money is growing (and Democrats are winning),” said one co-author of the June resolution. “The easiest fix would be to strike the words ‘or employer’s (PACS).’ Then the Democratic Party can have a conversation about how best to respond to the climate emergency without abandoning workers in the fossil fuel industry.”

McKibben Urges California to Free Itself from Fossil Fuels