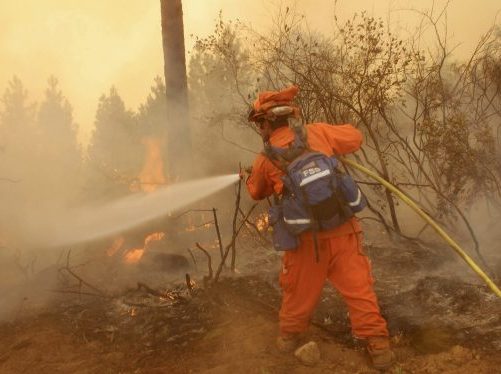 The California Department of Corrections is getting serious pushback online after bragging about the large number of inmates stepping up to fight the state’s epic wildfires.

Just two problems that have been making the rounds on social and commercial media: The “volunteers” are being paid what amounts to slave wages of US$2 per day, plus another US$1 per hour for dangerous, physically grueling work, Newsweek reports. And in a brutal twist, the assignment usually falls short of on-the-job training, since the state’s firefighting agency won’t hire convicted felons. They serve alongside salaried firefighters who are paid an average of $74,000 per year.

The long-standing “employment” arrangement, which dates back to the Second World War and now saves California $80 million per year, has Color of Change running a petition directed at Gov. Jerry Brown. “Fighting fires is backbreaking labour, and in the state of California many people who are doing this work have been forced to do so,” the organization states. “Prisoners, not protected under any work safety regulations, often return from fighting fires with broken ankles, arms, burns, and suffering from extreme exhaustion.

“To make matters worse, many of the prisoners doing this work are women, most of whom are mothers. These mothers often choose to take on this dangerous work because they are told that it could accelerate their release date by earning ‘good behaviour’, usually resulting in a mere two days off your sentence.” (Newsweek cites the good behaviour provision as two days off for each day served.)

“That’s why we’re calling on Gov. Jerry Brown to ensure that prisoners in this firefighter program receive the same wage as firefighters who aren’t incarcerated, and that a pathway is created for prisoners working as firefighters to have a real job on the outside—phasing this program out for good.”

“There are some days we are worn down to the core,” said incarcerated firefighter La’Sonya Edwards, in a 2017 New York Times article cited by EcoWatch. “And this isn’t that different from slave conditions. We need to get paid more for what we do.”

“Look, the biggest, most important thing is putting out the fires,” Lisa Graybill, Deputy Legal Director at the Southern Poverty Law Center, told Newsweek. “And in my experience, prisoners are so eager for the chance to work and chance to demonstrate their rehabilitation that they’ll accept any work conditions. But they shouldn’t be exploited by the state. They’re putting their lives on the line like other California firefighters, and they should be paid fairly for a fair day’s work.”

Particularly because, after years of training and experience, “an inmate who is released is typically unable to put their skills to work upon release,” Newsweek notes, citing Graybill. “Nearly all firefighters in California are required to be licenced emergency medical technicians, but convicted felons are typically barred from receiving said licences.”

Jordan Barab, former deputy assistant secretary of the U.S. Occupational Safety and Health Administration, pointed to the risks prisoners take on whenever they accept work in the outside world. “Anytime you see prisoners doing work, they don’t have the same kind of job security or right to complain about unsafe conditions,” he told Newsweek. They can’t quit or go work for different jobs. They either do the job as they’re told to do it or they go back to regular prison. This is a captive group of workers being asked to put their lives on the line.”

The other question, compensation for fallen inmate firefighters’ families, came to the fore in 2016, when 22-year-old inmate Shawna Lynn Jones died on the lines. “Many people who are incarcerated have families on the outside who are relying on them to come home and be their breadwinner again,” Graybill said. “If anything does happen to them, will there be provision for their families and will they be taken care of in any way?”

Yet she added that the arrangement is hard for prisoners’ rights advocates to challenge. “The danger for litigators like me is if we sue, the state could stop this program, and that would be terrible because people want this opportunity.”

In a Washington Post article last week, based largely on her late cousin’s experience as an inmate firefighter, Harvard University political theorist Danielle Allen describes what life on the lines is like.

“The people who fight raging wildfires in the West withstand unthinkable heat and smoke,” she writes. “To save lives and property, they work through the night by the light of the flames, subsist on military-style rations, and depend on the total commitment of all members of a crew. Some lose their lives; they all go out knowing they might. And when they conquer a fire, they go home. For a good number—those who serve on inmate fire crews—home, so to speak, is prison.”

For Allen’s cousin Michael, the chance to serve on an inmate fire crew was the “one beautiful, life-transforming opportunity” that came his way as a result of his incarceration. Her post includes quotes from his diary.

“The pay was outrageous, $1 a day at the time. But that was not why Michael did it,” she writes. “Michael fought fires because the work gave him the chance to be the man he had always known he could be. Smart, courageous, and dedicated, he loved the firefighting and was immensely proud of it. He also made his best progress at correspondence college courses while simultaneously working hard in the often-terrifying outdoors.”

She adds that, “within a penal system that in its other features was more likely to degrade and reduce human development, Michael accidentally fell into a program that, but for the exploitative pay, is an excellent example of a response to wrongdoing that seeks to make the victim whole, seeks to make the community whole, and seeks to help the wrongdoer prepare for positive relations with the broader society.”

Some of the online reaction picked up on the theme that firefighting gives inmates an opportunity to make a difference working outdoors with minimal supervision. But some of the response has been much more scathing and less forgiving of the inmates’ pay scale and subsequent job prospects.

If inmate firefighters are trusted to save lives and handle axes and chainsaws with minimal supervision, “maybe they didn’t need to be in prison in the first place,” David Fathi, director of the American Civil Liberties Union’s National Prison Project, told the Los Angeles Times.

“Inmate firefighters were called ‘Angels in Orange’ in Sonoma last October during the wildfires: they were utterly heroic,” tweeted @hollykulak. “I think they should be paid more and have fair opportunities to continue in this profession upon leaving prison, if they so choose.”

“Call me crazy, but I don’t think young people should be ‘battling wildfire flames’ at all, let alone for $2 an hour in a state with an $11 minimum wage,” added @AngelaHanks.

“#California has CHILDREN battling wildfires? How is it legal for @CACorrections to do that?!?” asked @trekkerteach12. “And, btw, inmate firefighters need to be compensated at more than $1 per hour & given a path to a career in firefighting when they get out.”

“California’s inmate firefighter program has a lot of problems, but I hadn’t heard about this one: skilled inmate firefighters are effectively barred from working in the field after they’re released,” commented @int10h. “That’s a lose-lose situation, for everyone.”