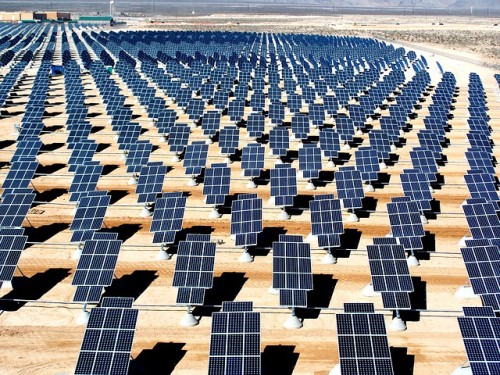 Two massive renewable energy projects are quickly taking shape in the Middle East, with the world’s largest solar farm to date under construction in the Egypt’s Western Desert and China’s Silk Road Fund planning a significant investment in a Dubai solar park expected to hit five gigawatts of capacity by 2030.

The Los Angeles Times coverage of the Western Desert project takes readers back to 1913, when a U.S. inventor built the world’s first solar thermal power station on the outskirts of Cairo. The work was derailed by the First World War and the discovery of cheap oil. But “more than a century later, that vision has been resurrected,” with the US$2.8-billion Benban complex set to open next year.

The 1.8-GW project, located about 400 miles south of Cairo, “will single-handedly put Egypt on the clean energy map,” the Times states. And that’s “no small feat for a country that’s been hobbled by its longtime addiction to cheap, state-subsidized fossil fuels and currently gets more than 90% of its electricity from oil and natural gas.”

By 2025, Egypt plans to generate 42% of that power from renewable sources.

“This is a big deal,” said Wood Mackenzie/GTM Research solar analyst Ben Attia. “I can’t think of another example where so many big players have come together to fill the gap.”

Meanwhile, the U.S. government is providing funds to train hundreds of technical students in solar and wind energy, the Times reports. “Last week, Egyptian President Abdel Fattah Sisi inaugurated several big electricity projects, including the expansion of massive wind farms on the gusty Gulf of Suez in the Red Sea,” and Russia is offering $21 billion for a nuclear station on the country’s north coast.

Meanwhile, the Dubai Electricity and Water Authority is working on the 700-megawatt fourth phase of its Mohammed bin Rashid Al Maktoum Solar Park, CNBC reports, with the Silk Road Fund taking a 24% stake in the project. The solar park is “the biggest single-site solar park on the planet,” the news report states.

Dubai’s plans call for the park to hit 1,000 MW capacity by 2020 and 5,000 MW by 2030, using a mix of photovoltaic and concentrating solar to eliminate more than 6.5 megatons of greenhouse gas emissions per year.