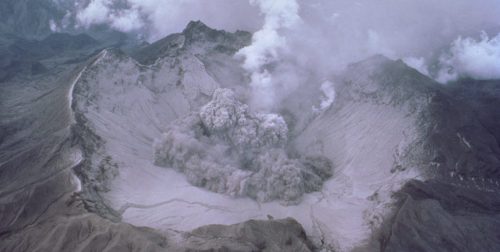 To cool the world and also boost plant growth, geo-engineered crops might do the trick. But if they work by dimming the sunlight, the plants will suffer.

LONDON, 13 August, 2018 – Proposals to tackle climate change that rely on geo-engineered crops show neatly the double bind that can await remedies which try to do too much.

US researchers have cast yet another shadow over the hopes of those who think global technology could damp down global warming. A worldwide manmade sunscreen might limit distress to crops from heat extremes, but on the other hand the drop in solar radiation would be just as damaging.

The message: there is still no easy technological answer to the challenge of global warming and climate change.

Scientists report in the journal Nature that they studied two well-documented events in which nature itself conducted a form of geoengineering. One was the eruption of El Chichon in Mexico in 1982, and the other was the explosion of Pinatubo in the Philippines in 1991.

Pinatubo ejected a spectacular 20 million tons of sulphate aerosols into the upper atmosphere to reduce sunlight by 2.5% and to lower global average temperatures by around 0.5 C.

Such eruptions seemed to suggest a possible method for managing global warming, The deliberate release of aerosols into the stratosphere could, some scientists argued, counter the threat of global warming from ever greater emissions of greenhouse gases as a consequence of the ever more extensive combustion of fossil fuels.

The researchers then asked the question: what happens to crops when sunlight is scattered back into space? They analysed the levels of aerosols, all the available data for solar irradiation, and the statistics for crop yields for 105 countries from 1979 to 2009, to find that as the sunlight bounced back into space in 1982 and 1991, yields from rice, soy, wheat and maize all suffered.

“Sunlight powers everything on the planet, so we must understand the possible outcomes if we are going to try to manage it”

A bit more work with computer simulations showed them that losses from reductions in sunlight would match any benefits crops might gain from a cooler climate. Intentional geo-engineering would fail to deliver the hoped-for extra food on the global table.

“Shading the planet keeps things cooler, which helps crops grow better. But plants also need sunlight to grow, so blocking sunlight can affect growth. For agriculture, the unintended impacts of solar geo-engineering are equal in magnitude to the benefits,” said lead author Jonathan Proctor, a doctoral candidate at the University of California, Berkeley.

“It’s a bit like performing an experimental surgery; the side-effects of treatment appear to be as bad as the illness.”

Researchers have repeatedly examined
geo-engineering solutions to the challenge of climate change. Humans have inadvertently warmed the planet. So surely they could intentionally cool it again with some ambitious technology, the reasoning goes.

But almost every examination of the potential benefits and handicaps of such an approach has been discouraging: either the technology won’t deliver benefits, or it could prove harmful in unexpected ways.

Partners in the latest study include Solomon Hsiang of UC Berkeley and Marshall Burke of Stanford University. In the past few years the two have looked closely at the economic and social consequences of global warming, to find that temperature increases are likely to affect many people’s incomes; that as the thermometer rises, so does the danger of social conflict, and even of depression and suicide.

“Unknown unknowns make everybody nervous when it comes to global policies, as they should,” Professor Hsiang said. “The problem in figuring out the consequences of solar geo-engineering is that we can’t do a planetary-scale experiment without actually deploying the technology.

“The breakthrough here was realising that we could learn something by studying the effects of giant volcanic eruptions that geo-engineering tries to copy.”

Sunscreen by sulphate aerosol is not the only possible geo-engineering solution; and food security is not the only thing threatened by rising temperatures. The latest study is unlikely to be the end of the debate. The authors suggest more research into the human and ecological consequences of geo-engineering, both good and bad.

“The most certain way to reduce damages to crops and, in turn, people’s livelihood and well-being, is reducing carbon emissions,” Proctor said. And Professor Hsiang said: “Perhaps what is most important is that we have respect for the potential scale, power and risks of geo-engineering technologies.

“Sunlight powers everything on the planet, so we must understand the possible outcomes if we are going to try to manage it.” – Climate News Network