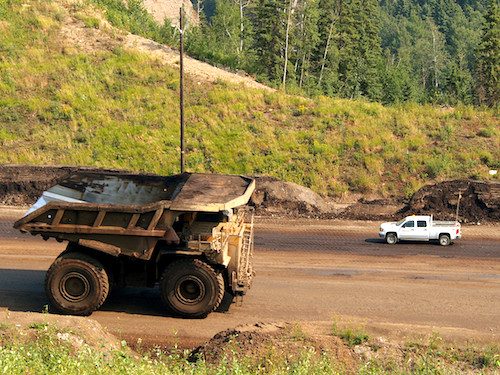 Imperial Oil and Suncor are gearing up to deploy driverless “heavy hauler” trucks in their tar sands/oil sands operations—invoking improved safety and “lower operating costs”, but downplaying the job losses that will result as the industry’s “de-manning” drive plays out.

Following the successful June deployment of the world’s largest autonomous haul truck at its Kearl mine north of Fort McMurray, Imperial plans to expand its field testing to seven such 400-ton vehicles before the end of 2018.

Imperial isn’t the first to buy into autonomous haulers. In January 2018, three years after a successful field pilot in which it “validated that the technology can be used safely, effectively, and efficiently in its operating environment,” Suncor Energy “announced it would start rolling out autonomous haulage systems across its mining fleet.”

In an April 2017 post, JWN cited CIBC analysts saying that “on a scale of one to 10 of being able to help oilsands producers save costs—today—autonomous hauling systems are a 10.” An earlier tar sands/oil sands update by CIBC analysts had found that “already, every truck that Suncor is adding or replacing in its fleet has the ability to go fully autonomous.”