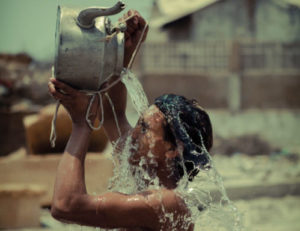 Global carbon dioxide concentrations have reached their highest point in 800,000 years, and the atmosphere would continue to warm for a couple of decades to a century even if greenhouse gases held steady at their current concentrations, according to the 2017 State of the Climate report released last week by the U.S. National Oceanic and Atmospheric Administration (NOAA).

“While the most significant jump was the global average for carbon dioxide (CO2)—which, at 405.0 parts per million (ppm), saw a 2.2 ppm increase from the previous year,” Common Dreams reports, “concentrations of other dominant planet-warming greenhouse gases, methane (CH4) and nitrous oxide (N2O), also hit ‘record highs’.”

The 332-page report, released as a special supplement to the Bulletin of the American Meteorological Society, identifies 2017 as “among the three hottest years ever, taking the top spot for warmest non-El Niño year since scientists began measuring in the 1800s,” Common Dreams notes. As of the end of last month, 2018 was “on track to set a new record.”

The report details how a rapidly overheating Earth “has meant three years of ‘unprecedented’ coral bleaching, Arctic air temperatures that are ‘warming at a pace that was twice the rate of the rest of the world,’ rapidly melting glaciers and ice sheets, and devastating tropical storms—such as Hurricanes Irma and Maria—that reflect ‘the very active state of the Atlantic basin.’”

All of that extreme weather has had a devastating financial impact, the story notes, with NOAA identifying 16 weather and climate events that each caused more than US$1 billion in damages in the United States.

Have not read the Report yet.
We are on the Titanic except this time our radar sees an iceberg but the Owner, the Captain and the Band Leader say Don’t worry