Putin-Trump Collaboration Might Be Aiming for Fossil Fuel Dominance 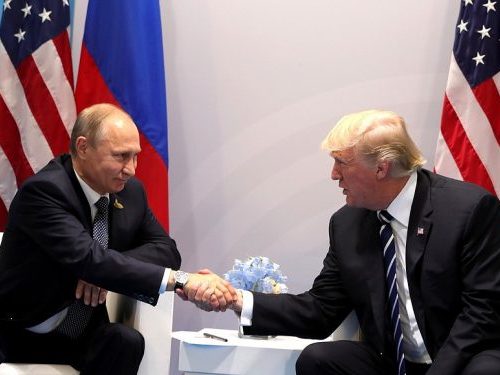 While most coverage of Donald Trump’s extraordinary news conference with Russian President Vladimir Putin focused on his refusal to believe his own intelligence agencies on Russia’s 2016 interference in the U.S. election, Grist columnist and veteran meteorologist Eric Holthaus is pointing to oil and gas development as a mostly unacknowledged area where the two democracy-challenged leaders may be moving in goosestep lockstep.

“We do have space for cooperation here,” Putin added.

While Holthaus says the fossil energy connection between Trump and his Russian patron has been documented in the past, “it’s worth saying again explicitly: There’s no way to understand Trump’s relationship with Russia without putting oil and climate politics at its centre. If you’re upset at Trump and Putin for undermining [U.S.] democracy, just wait until you find out that they are likely colluding to destroy our planet’s climate system, too.”

Fossils still power 80% of the global economy, “and the leaders of that dying industry might start acting in desperation to stave off its decline,” Holthaus adds. “You can see why rapidly eliminating dirty energy sources—exactly what science says we have to do—might be fiercely opposed by politicians who have a substantial stake in their success.” Which would be an apt description of Putin and Trump—their two countries combined produce nearly as much oil as the OPEC countries, and six times as much natural gas as the rest of the world combined.

“By working together, they can keep the global economy swimming in oil and gas,” Holthaus states. And “from their comments leading up to Monday’s meeting, it’s clear that Trump and Putin see the oil and gas industry as a critical component to their working relationship.” Which gives added context to Trump’s moves to pull the U.S. out of the Paris Agreement, open the U.S. Arctic to offshore drilling, introduce steel tariffs against Europe that will help out Russia’s pipeline manufacturing—and, possibly, open negotiations with North Korea that “might even be designed to clear the way for a Russian gas pipeline there.”

But if that is Trump’s and Putin’s game, Holthaus says they’re going to lose—for two reasons.

Ultimately, “either the world bands together to shift culture and the status quo away from fossil fuels, or the climate system will do it for us,” he writes. But before it comes to that, “with the costs of counteracting climate change coming down and the risk of locking in existential damages rising by the day, the only reason to delay is greed. And the truth is, now that more people than ever support action on climate change, it’s strong democratic institutions that are a direct threat to the oil industry.”

Which means that “the quicker we resolve to move away from our dependence on fossil fuels, the quicker Putin and Trump will become powerless.

In a Guardian post republished by Resilience.org, celebrated author and freelance writer Rebecca Solnit reminds her readers that the Trump era won’t last forever—but we all have to do our part to end it.

In the meantime,” she adds, “preserving what we can of the rule of law, the rights of everyone in this country whatever their immigration status, the environment, the institutions that benefit us from public schools to scientific projects. And more than protecting what we had, building what we lacked: I believe Trump came to power because people were indifferent and inattentive,” but many millions of Americans from all walks of life are indifferent no longer.

“I know a lot of us have rage fatigue and moral exhaustion from a little over a year and a half of the hell of Donald Trump’s ascendancy,” Solnit writes. “But dismay and devastation are emotions, and painful emotions can coexist with active strategies. Active strategies may be the best response to those emotions, not to take care of oneself but to forget oneself in responding to the larger crises,” just as U.S. anti-slavery leaders like Frederick Douglass, Harriet Tubman, and Sojourner Truth “were not felled by that devastation but driven to act by it”.

Solnit adds that “you oppose a regime by standing up to it, but also by being its opposite. For this regime that means being compassionate and inclusive where they are vicious and exclusionary. It means being committed to precision and accuracy when they are sloppy with the truth and the facts or at war with them. It means preserving memory, both of how things are changing in the present, and the long-term memory of how many people before us have opposed and resisted and won.”