Kinder Morgan Used Informants to Thwart Public Protest. Will Canadian Taxpayers Now Be Spying on Ourselves? 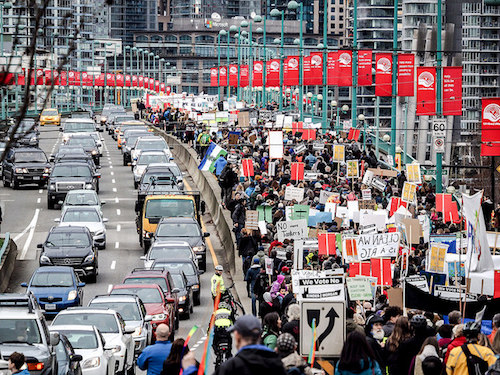 In May, Warren Forsythe, founder and owner of a security company “which claims niche expertise” in the oil and gas sector, and his employee, ex-RCMP investigator Terry Shendruck, collected some 30 pages of notes on citizens who had gathered near the building site of Trans Mountain’s Westridge Marine Terminal in Burnaby to protest construction of both the terminal and the pipeline.

Those notes, “as well as 30 surreptitiously-snapped photographs,” were instrumental in persuading a B.C. Supreme Court justice that “protesters were ‘making every effort to calculate and orchestrate’ their protest to maximize disruption of Kinder Morgan’s construction activities,” Observer notes.

Having reached that conclusion, the judge “tightened the terms of an earlier injunction, removing a 10-minute grace period between when police would read a warning for those blocking access to disperse and when arrests would be made.”

For protesters like Protect the Inlet member Sarah Beuhler, Kinder Morgan’s use of informants was “vexing,” but “not surprising.”

“Part of civil disobedience is knowing that you are breaking the law, and that is always going to be evidenced at some point,” she said.

“When somebody chooses to go through that process as a plant or a spy I don’t think there’s anything illegal about it,” she added. “They are just doing a job in a system that demands fairly dehumanizing things from its employees.”

But Jeffrey Monaghan, associate professor at Carleton University’s Institute for Criminology and Criminal Justice, and co-author of the May, 2018 book Policing Indigenous Movements, is anxious to know just how far and deep that system of dehumanization runs.

“We [currently] know very little, certainly in Canada, about the role of private eyes and private investigators and even the security branches of the energy companies in terms of their role in collecting intelligence and surveillance information on protesters,” he told Observer over the course of several interviews. What is known “is that over the past few years the federal government has made a fairly substantive effort to try to integrate these private companies, especially the resource companies and their security wings, into the national security bureaucracy.”

Such integration “includes an RCMP web portal specifically for companies that operate what the government considers critical infrastructure (including pipelines) to upload information about protests as part of a ‘suspicious incidents reporting’ framework,” Observer notes.

Of urgent concern, Monaghan said, is the need to keep tabs on where all that private intelligence ends up.

“A lot of this information is sitting in data banks and can be revisited at later points. We don’t know what the filters and the thresholds are for keeping this information.”

But one thing is certain: there is a lot of money riding on keeping protesters away from oil and gas construction projects, given the C$90 million per month Kinder Morgan Canada CEO Ian Anderson claimed the project was losing due to construction delays.

And the protesters aren’t about to give up.

The day after Kinder Morgan won a court injunction to keep blockade participants “from physically obstructing the Westridge Marine Terminal and nearby Burnaby Terminal, as well as any other Trans Mountain-related site,” 5,000 undaunted protesters “marched up Burnaby Mountain.”

And since that day, “more than 200 people have been arrested for breaking the injunction,” including federal Green Party leader Elizabeth May and NDP MP Kennedy Stewart.

Asked “whether the government was paying for any use of private investigators by Kinder Morgan since Ottawa agreed to buy the project,” a federal Finance Department official declined comment.

But with Kinder Morgan continuing construction this summer at taxpayers’ expense, Greenpeace Canada Senior Energy Strategist Keith Stewart said the federal government is now in an awkward position, since Ottawa is now “both referee and one of the teams.”

76% of Ellesmere Island Glaciers Shrink Significantly, and Most ‘Aren’t Coming Back’