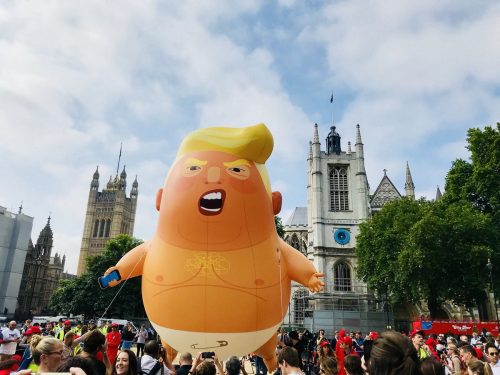 Donald Trump visited London, England after his trip to the NATO summit last week, and this protest blimp was in the air to greet him. Photo: Brian Klaas/Twitter

In what The Canadian Press calls “a rare patch of common ground” between Canada and the United States during last week’s NATO summit in Brussels, the Trudeau government is expressing its “significant concerns” about a natural gas pipeline megaproject that had prompted Donald Trump to accuse Germany of being “captive” to Russia.

The Nord Stream 2 pipeline has previously come under fire for environmental rather than geopolitical reasons, with German Chancellor Angela Merkel facing criticism for promoting the deal while simultaneously trying to lead implementation of the Paris Agreement. Greenpeace Poland has panned it as a “useless and harmful investment” that would endanger eagles, seals, and old growth forest in Russia’s Kurgalsky Nature Reserve, while Denmark has considered blocking the project over security concerns.

The latest controversy over the US$11-billion line, just one of several the former reality TV star ignited from the moment he set foot in Europe last week, began at NATO’s opening session Wednesday, when Trump “railed against what he characterized as a ‘massive gas deal’ between Germany and Russia, calling it inappropriate,” CP recalls. “He said the deal makes Germany ‘captive’ to and ‘totally controlled’ by Russia, and he urged NATO leaders to take a closer look at it.”

“Germany is totally controlled by Russia, because they will be getting from 60 to 70% of their energy from Russia and a new pipeline,” Trump told NATO Secretary-General Jens Stoltenberg.

“You tell me if that’s appropriate, because I think it’s not, and I think it’s a very bad thing for NATO and I don’t think it should have happened,” he added. “We’re supposed to be protecting you from Russia, but why are you paying billions of dollars to Russia for energy?”

A rather less inflammatory version of that sentiment was echoed by Foreign Affairs Minister Chrystia Freeland, who said Canada had “significant concerns” over a project designed to pipe Siberian gas beneath the Baltic Sea to Germany, bypassing existing land routes through Ukraine. “She said she has discussed the issue with Ukraine, which opposes the pipeline because of the leverage it would give Russia over European countries,” CP notes.

“As for Germany’s dependence (on Russia) as a major gas buyer we cannot agree with this premise,” he told media. “Supplies of pipeline gas do not lead to dependence of one country on another but to complete mutual dependence. That is a guarantee of stability and future development.”

German companies with interests in eastern Europe took offence, as well, after the U.S. State Department repeated a warning to western businesses that they risked retaliation if they took part in Nord Stream 2. “Threats of U.S. sanctions against European companies invested in Nord Stream 2 encroach on European energy policy,” said Wolfgang Buechele, chair of the German Committee on Eastern European Economic Relations. He called Trump’s remarks at NATO “an assault on business relations between German and European countries and Russia”.