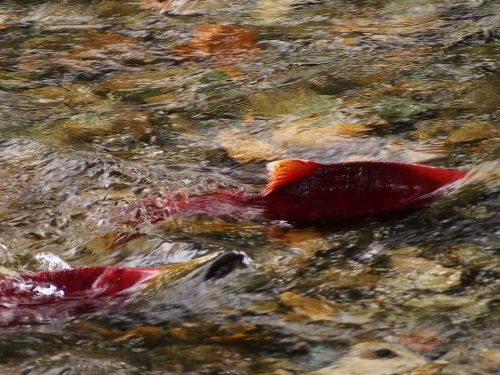 State-of-the-art DNA analysis—and the traditional knowledge and first-hand observations of resident communities—confirm that salmon species are increasingly appearing in northern waters that 15 years ago would simply have been too cold for them.

Whereas only the occasional “pulse” of pink or chum salmon would appear in the Mackenzie River Delta, or points north, as recently as 14 years ago, “now all of the communities in the Inuvialuit Settle Region (along the Arctic coast)” are catching the iconic southern species “every other year,” said research scientist Karen Dunmall, who’s overseeing a community-based Arctic salmon research project for the Canadian Department of Fisheries and Oceans

“And it’s not just pink and chum salmon anymore,” reports The Narwhal. “Other southern species including coho, sockeye, and Atlantic salmon are starting to show up, as well.” Anxious to get a clearer picture of where these migratory creatures are headed, “Dunmall has begun applying a cutting-edge technology called environmental DNA, or eDNA,” a technique which involves testing water samples for “free-floating bits of genetic material, things like skin cells or scales that have been shed.”

A “brand new way of determining which creatures are in a body of water without ever seeing them,” writes The Narwhal, eDNA is “especially useful in the vast and remote Arctic.” Moreover, “anyone with a little training” can collect water samples, said Robert Bajno, the Winnipeg-based DFO scientist who is developing the technology.

But Dunmall’s work is about more than just DNA. “Whenever I can, I talk to people about salmon,” she told The Narwhal.

Amongst the things she has learned: “Some Indigenous languages along the Mackenzie River have words for salmon, but not all. And among those that have a word for the fish, it’s only chum that is named.” She said she knows of no local Indigenous words for chinook or coho salmon, and she’s also been told that the “years when big pulses of chum salmon would show up in the communities of the Mackenzie River…are becoming more frequent.”

Now, moving between the lab and local Arctic communities, “Dunmall is piecing together what looks like a steady yet substantial change in the species makeup of Arctic fish populations,” The Narwhal notes. “Pacific species have been found as far east as Cambridge Bay, while Atlantic salmon have been making their way northwest through Nunavut.”

With accelerating warming of the Arctic drawing more and more fish species north, scientists anticipate interbreeding with Arctic fish stocks, leaving “the ecosystems and people that exist there today to reckon with the consequences.”