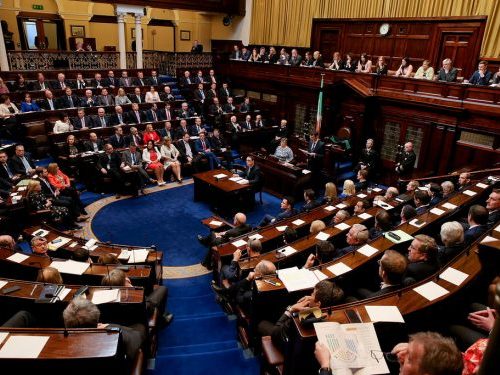 The global divestment movement received a huge boost last week, with Ireland’s lower house of parliament voting unanimously to require the country to shed all fossil fuel investments “as soon as is practicable,” reports National Observer, in a re-post from The Guardian.

“Expected to pass rapidly through the upper house, meaning it could become law before the end of the year,” The Guardian notes, the bill demands that Ireland’s national investment fund sell off its “more than €300 million in fossil fuel investments in 150 companies.”

The reference to “‘as soon as is practicable’ is expected to mean within five years,” the UK-based paper states.

While defining a “fossil fuel company” as “a company that derives 20% or more of its revenue from exploration, extraction, or refinement of fossil fuels,” the Irish divestment bill actually permits further investment in Ireland’s own fossil fuel companies, if doing so “funds their move away from fossil fuels.”

Éamonn Meehan, executive director of international development charity Trócaire, welcomed the bill’s passage as “good news” for a country which “just last month…was ranked the second-worst European country for climate action.” But he added that “it has to mark a significant change of pace on the issue.”

But Thomas Pringle, the independent legislator who introduced the bill, said the bill sends “a clear message that the Irish public and the international community are ready to think and act beyond narrow, short-term vested interests.”

Ireland’s decision to divest is the latest in a profound attitudinal shift that has seen “trillions of dollars of investment funds” sold off by significant shareholders around the world—including both the state and the city of New York, which together manage some US$400 billion, notes the Guardian.

On the other hand, “Norway’s huge, $1-trillion sovereign wealth fund has only partially divested from fossil fuels, targeting some coal companies, and is still considering its oil and gas holdings.”

And then there is Canada.

In a widely-circulated letter to supporters, written “with a Guinness clutched in one hand,” 350.org co-founder Bill McKibben praised Ireland’s leadership—and excoriated Prime Minister Justin Trudeau for having “cemented a place for himself on the wrong side of history.”

Reminding readers that the Trans Mountain pipeline buyout is to be finalized July 22, McKibben urged Canadians to speak up loudly against the deal at 350.org town halls taking place across the country.