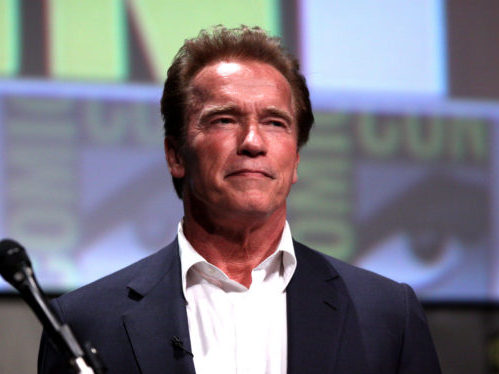 In a comically serious riff on his famous role as The Terminator, former California governor Arnold Schwarzenegger gives Donald Trump some advice on what a “real action hero would do,” in a video originally uploaded to Facebook by Los Angeles-based media company ATTN.

Addressing a bobble-head with an uncanny resemblance to Trump, Schwarzenegger urges the toy action figure to remember that real super-heroes only “go back in time to protect future generations.”

Which means the Trump administration is getting it crazy wrong with its efforts to turn back the clock and protect a coal industry that is a clear and present threat to the future.

“I just read that you want to force utilities to buy coal,” Schwarzenegger says, in a tone of gobsmacked astonishment. “To use your own words,” he goes on, splicing in actual footage of Trump talking about free trade, “this is a terrible deal. A horrible, one-sided deal. And a deal which punishes the United States.”

Declaring it “foolish to bring back outdated technology to suit your political agenda,” Schwarzenegger asks the bobble-head what else it has in mind. “I mean, what are you going to going to bring back next? Floppy disks? Fax machines? Beanie Babies? Beepers? Or Blockbuster? Think about it. What if you tried to save Blockbuster?”

He adds that Trump’s attempt to rescue the coal industry, whose fortunes are failing badly as renewables and natural gas soar, is as wrong-headed as it would be to prop up Blockbuster in the face of the Netflix juggernaut.

The punchline in his analogy: “Coal is the Blockbuster Video of fuel sources. And it’s on its way out.”

And “there are consequences of standing in the way of progress,” Schwarznegger reminds Trump. In propping up coal, the White House is not only forcing “an inferior product on consumers,” but prolonging the life of a substance that pollutes air, land, and water and kills seven million people around the world each year.

“I know the 80s were good to both of us,” Schwarzenegger concludes, but “you’re the president of the United States now! It is time to start looking at the future,” let coal die its natural death, and invest in renewables that don’t poison the environment.

And “if you truly want to save coal miners,” he adds, “train them for the jobs of the future, where they don’t have to work thousands of feet underground, breathing deadly air….Because Mr. President, that’s what a real action hero would do.”

China Withdraws from First Round of Aviation Emissions Reduction Plan