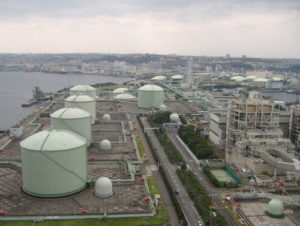 A rush of business activity and rising prices in the town of Kitimat, British Columbia is being taken as a sure sign that the C$40-billion LNG Canada project, backed primarily by Royal Dutch Shell, is about to receive a final go-ahead from investors.

Among other positives attributed to what could soon become Canada’s biggest infrastructure project, the British Columbia government claims the plant will have the lowest greenhouse gas emissions of any LNG operation in the world.

“I would put money on it—it’s going ahead,” said Mayor Phil Germuth, who recently hosted visits from Mitsubishi Corporation, one of Shell’s four investment partners, and UK-based Barclays Bank. Crystal Smith, Chief Councillor of the nearby Haisla Nation, told Bloomberg she couldn’t find parking in a normally deserted lot when she arrived for another appointment with Mitsubishi representatives.

“Who gets excited to see a full parking lot? I got goose bumps from seeing it full,” Smith said. In contrast to past meetings, when officials were seeking the Haislas’ consent for the project, she added that this time, there was no agenda. “They just wanted to meet—in the sense that they’re very optimistic we’re going to be together for the next 40, 50 years.”

A final investment decision by Shell, Mitsubishi, Malaysian state fossil Petronas, Petrochina, and Korea Gas Corporation is expected by the end of this year, Bloomberg notes. The province has set a November 30 decision deadline for the project to qualify for up to $6 billion in tax breaks and savings.

But analysts see the approval as “effectively a done deal”, in the words of Calgary-based Stream Asset Financial Management, given the end of a natural gas glut in Asia. Sixty kilometres to the north in Terrace, B.C., Mayor Carol Leclerc says she’s “99.9%” sure the project will proceed, adding that “it’s going to be like a tidal wave coming into the northwest.”

And in Kitimat, the signs of boomtown development are already unmistakable.

“The lights are on, shades open, and SUVs parked outside a 49-unit apartment complex built to house Shell executives, which sat mostly darkened for the last two years,” Bloomberg reports. “Local workers have left jobs at a Rio Tinto Plc smelter nearby to join contractors ramping up for the LNG project. Landlords are raising rents, and houses are selling twice as fast as they used to in anticipation of a flood of workers coming to town.”

Citing Indigenous and municipal officials, the U.S. news agency adds that “Shell has painstakingly cultivated on-the-ground support and is unlikely to face local opposition. The plant will have the lowest carbon emissions in the world per ton of LNG produced, according to the provincial government. To address fears of pipeline leaks, it hired an energy consultant to lug a vat of chilled gas to local schools, pouring LNG onto the floor to demonstrate how quickly it evaporates into thin air.”

And the LNG consortium even struck the right note when tragedy struck last spring. “Amid a national outpouring of grief over a deadly April bus accident involving a junior hockey team from Saskatchewan, Shell donated a new bus with seat belts to a high school in Kitimat,” Bloomberg recounts.

“If there were a blueprint of how to approach any kind of major industrial project, especially in oil and gas, LNG Canada is one to learn from,” Smith said.

If it’s a done deal,I guess public consultations have meant nothing. Money talks. They are going to destroy the Douglas Channel…but isn’t that the way it works? Promise lots of jobs while destroying the environment? Some native groups have sold out for the “20 pieces of silver”, thinking that these corporate eco-terrorists will keep their word…whatever that is…they may rue the day sooner than later…already wrecking the fishing.

this is fake news…there has been opposition to this project for years….media acting as shills for industry…what is new about that??