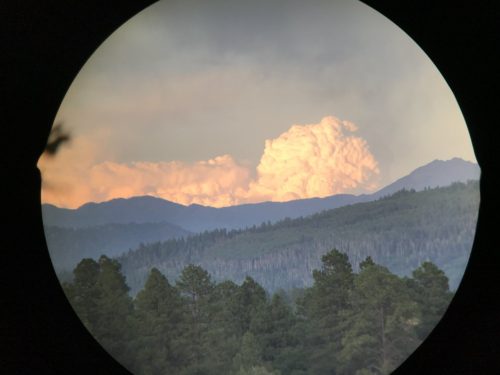 Several regions of the world are sweltering under a wave of high heat and persistent wildfires, with temperature records falling from Canada and the United States to the Middle East, from Siberia to Africa.

“No single record, in isolation, can be attributed to global warming,” the Washington Post writes, in a “tour around the world” that it published last Tuesday, then had to update daily through the end of the week. “Collectively, these heat records are consistent with the kind of extremes we expect to see increase in a warming world.”

The Post overview captures the scope of the story: from scorching high temperatures in the Middle East and Southern California, to 51.3°C heat in Ouargla, Algeria that set a record for all of Africa, to at least 54 dead in southern Quebec, including 28 in Montreal. North America set or tied temperature records in Montreal, Ottawa, Los Angeles, Denver, Mount Washington, NH, and Burlington, VT, with a northeastern “heat dome” bringing stifling temperatures above 100°F to Philadelphia, New York, and Washington, DC.

In Siberia, while actual weather observations are scarce, modelling put the temperature above 32°C (90°F) July 5, more than 22°C/40°F above normal. “It is absolutely incredible and really one of the most intense heat events I’ve ever seen for so far north,” wrote meteorologist and blogger Nick Humphrey.

The United Kingdom saw record highs in Glasgow, Belfast, Shannon, Ireland, and Castlederg, Northern Ireland, Eurasia in Tbilisi, Georgia, Yerevan, Armenia, and several locations in southern Russia, and the Middle East in Quriyat, Oman. And experience in Iran showed that it didn’t take record high heat to trigger public protests, a violent response, and at least one strange burst of paranoia from a senior public official.

On Grist, veteran climate hawk and meteorologist Eric Holthaus points to the firestorms sweeping much of the western United States as evidence that a new era of “fire tsunamis” has begun, citing Ben Brack, incident commander for the Spring Creek fire.

“It was a perfect firestorm,” Brack told the Denver Post. “You can imagine standing in front of a tsunami or tornado and trying to stop it from destroying homes. A human response is ineffective.”

“The official term for the hellish meteorological event that hit La Veta is a ‘firestorm,’ a self-propelling explosion of flame generated by strong and gusty winds from a particularly intense fire over extremely dry terrain,” Holthaus explains. “When a fire gets hot enough, it can generate its own weather conditions and wind speeds can approach hurricane force, drying out the surrounding land. In just a few hours on Wednesday night, the Spring Creek fire swelled by nearly 20,000 acres, with airborne sparks igniting new fires nearly one mile downwind.”

The fire was hitting hard late last week, with no immediate end in sight.

“Pyrocumulus clouds, a sure indicator of intense heat release from wildfire, were clearly visible from 100 miles away. The fire is just 5% contained and covers more than 100,000 acres—larger than the city limits of Denver—making it the third-largest wildfire in state history,” Holthaus wrote July 5. Officials said a “300-foot tower of flames” had wiped out a whole subdivision, with no injuries or deaths reported so far.

“Fire is a natural part of ecosystems throughout the West,” Holthaus stresses, “but what’s happening now is far from natural. There’s growing evidence that climate change is starting to create the conditions for more frequent firestorms.”

In a post two days earlier, Holthaus noted that July had barely begun, yet the wildfire season was in full swing and likely to continue at least into September. While rising temperatures were a “chief culprit,” he wrote, “wildfire politics plays a big role, too. With more people living in harm’s way and the costs of fire suppression spiraling up, it’s difficult to ignore the fact that the vast majority of wildfires are human-caused. Authorities in California, Colorado, Utah, Texas and other states have banned Fourth of July fireworks this week for fear of starting more of them.”

EcoWatch said 113 million Americans were under heat warnings ahead of the country’s July 4 holiday.

In a separate post citing the New York Times, EcoWatch put the number of uncontained wildfires across the western United States at 29. The Times described the roaring series of flames as “the new normal”, and Wildfire Today had begun a seasonal sequence of several daily updates on the West and County fires in California, the Spring Creek and Lake Christine fires in Colorado, the Klamathon fire in Oregon, and the general increase in wildfire potential across California and the U.S. Northwest. Firefighters working to control the Valley Fire in California’s San Bernardino National Forest faced extreme heat one day and severe flooding with thunderstorms the next, while crews fighting Colorado’s Weston Pass fire saw a tornado touch down just south of them on Thursday.

In the UK, meanwhile, The Independent attributed severe fires in the northern Moorlands to a combination of climate change and human fire-starters. “Certainly, parts of England have just experienced their driest-ever June,” the paper reports. “Temperatures have reached 32°C. Only the breeze has been normal—and that hasn’t helped the firefighters. It’s notable too, of course, that the burning of peat, that great carbon store, further impacts on the climate (not to mention the immediate health implications of such a blaze).”

Correspondent Will Gore said the fires also “highlighted the still-yawning north-south divide existing in Britain. That is evident not least in the media coverage of the incidents. Newspaper front pages have been as likely to focus on prospective hosepipe bans and fears of a lettuce shortage as they have been to report on the vast fires destroying square mile upon square mile of England northern uplands—let alone examine why angry young men might want to start them.”

If those fires had started in the southeast, he added, “you can bet your bottom dollar we would see front pages dominated by fires then, with letters of outrage to editors published by the bucket-load and hard questions put to ministers.”

In Siberia, the “ridiculously hot and smoky” conditions in Siberia could have implications for Arctic sea ice. “Whether temperatures are unusually high or off-the-charts high, the combination of heat and wildfire smoke poses a distinct risk,” wrote Earther senior reporter Brian Kahn. “We’ve already seen warm oceans and air gobble up ice way earlier than normal on both sides of the Arctic, from the Bering Sea in the west to the seas around Greenland in the east.” And “then there’s the smoke, which contains bits of ash and soot that will eventually fall out of the atmosphere. If these dark particles end up on ice, they can accelerate its melting by absorbing more of the sun’s energy than the previously white, reflective surface.”