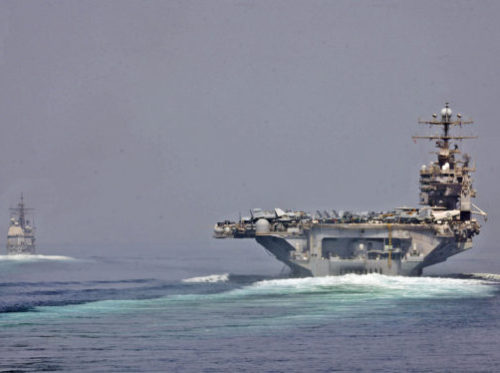 The U.S. Navy and Iran’s Revolutionary Guards are exchanging tough talk about the strategically vital Strait of Hormuz, as Donald Trump tries to pressure countries to stop buying Iranian oil by November 4 or face the financial consequences.

“The European Union is proposing a plan for salvaging a multinational nuclear deal with Tehran after Washington withdrew, but Iranian President Hassan Rouhani told leaders in Paris and Berlin on Thursday that the package did not go far enough,” Reuters reports. “Praising Rouhani’s ‘firm stance’ against the United States, the head of the Revolutionary Guards said their forces were ready to block the Strait of Hormuz, which links the Gulf to the open sea.”

If U.S. pressure makes it impossible for Iran to sell its oil, declared commander Mohammad Ali Jafari, no one else will be able to, either. “We will make the enemy understand that either all can use the Strait of Hormuz or no one,” he said.

“The U.S. and its partners provide, and promote security and stability in the region,” responded U.S. Central Command’s spokesperson, Navy Captain Bill Urban, in an email to Reuters. “Together, we stand ready to ensure the freedom of navigation and the free flow of commerce wherever international law allows.”

The IRNA state news agency “said people protesting over poor water quality in a western district of the city had thrown projectiles and set fire to rubbish bins and a vehicle,” Al Jazeera adds. “The agency did not report any further injuries but added that water pollution in the two cities of Khuzestan province had sparked several demonstrations over the past four days.”

About 40% of the country has been in “serious drought” since December 2017, with a government monitoring agency describing the period between September and December as the driest in 67 years.

The protests took place in a part of Iran where Rouhani has “threatened to cut subsidies for families who had a hard time feeding themselves because of environmental conditions,” EcoWatch reports, citing an article earlier this year in Scientific American. “You have climate change, shortage of water, they can’t grow their crops, and now they’re getting their cash handouts taken away,” said Atlantic Council South Asia Center Senior Fellow Amir Handjani. “It’s a panoply of issues coming together at once.”

“Joint teams from Israel and one of the neighbouring countries make the clouds entering into Iran barren,” he said, according to translated news reports. “Moreover, we are faced with cases of cloud theft and snow theft.”

The comment earned online mockery in both Israel and Iran.

“Israelis generally reacted to the comments in jest, suggesting Mossad, Israel’s intelligence agency, was behind the weather theft. Others congratulated Jalali on his ‘true Nobel Prize material,’” Euronews reports.

“Many Iranians also mocked Jalali’s comments, however, also noted that his comments deflected from the serious issue of shortages of drinking water across the country.”