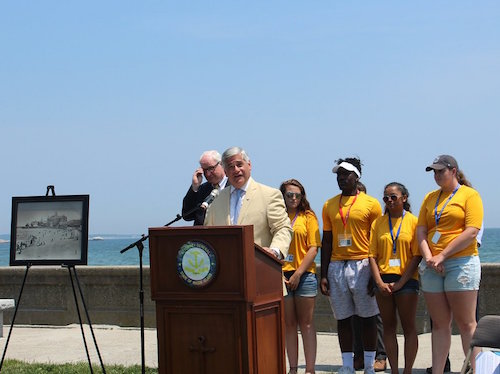 Tiny Rhode Island is casting a big shadow this week, becoming the first U.S. state to sue the fossil industry for its contribution to the coastal impacts of sea level rise, extreme weather, and warming oceans.

“For a very long time, there has been this perception that ‘Big Oil’ was too big to take on, but here we are—the smallest state—taking on some of the biggest corporate polluters in the world,” said Attorney General Peter Kilmartin.

“Big Oil knew for decades that greenhouse gas pollution from their operations and their products was having a significant and detrimental impact on the Earth’s climate,” he said. “Instead of working to reduce that harm, these companies chose to conceal the dangers, undermine public support for greenhouse gas regulation, and engage in massive campaigns to promote the ever-increasing use of their products and ever-increasing revenues in their pockets.”

The suit, filed in Providence/Bristol County Superior Court, names 14 colossal fossils as defendants, including ExxonMobil, Chevron, BP, and Royal Dutch Shell. “As a direct and proximate consequence of Defendants’ wrongful conduct described in this Complaint,” the suit states, “average sea level will rise substantially along Rhode Island’s coast; average temperatures and extreme heat days will increase; flooding, extreme precipitation events, such as tropical storms and hurricanes, and drought will become more frequent and more severe; and the ocean will warm and become more acidic.”

Known as the Ocean State, Rhode Island has more than 400 miles of coastline, and its coastal communities are already at risk, InsideClimate News reports. Addressing media from a seawall in Narragansett, “Kilmartin noted that the area where he was standing could be underwater if a major storm were to hit later in the century, when the seas are several feet higher.”

While a statement from Shell decried “lawsuits that masquerade as climate action and impede the collaboration needed for meaningful change”, Sen. Sheldon Whitehouse (D-RI) said the courts are the right place to deliberate Rhode Island’s issue. “The fossil fuel industry is fond of saying, you’re in the wrong forum, you shouldn’t be going to the courts, you should be going to Congress,” he said. “The reason they say that is because they have Congress locked up with their political power and their money and their influence.”

Gov. Gina Raimondo also tied the suit to the Trump administration’s determination to obstruct U.S. action on climate change. “Given that we have a president in the White House who denies climate change and has pulled out of the Paris climate accord, it puts a greater burden on states to take action,” she said. “If the federal government isn’t going to do their job, we’ll do it for them.”