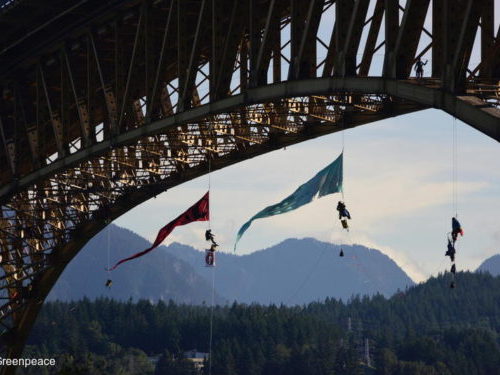 Seven of the 12 rappelled down from the Ironworkers Memorial Bridge in Vancouver, aiming to blockade the Serene Sea, a tanker that was scheduled to leave the Houston-based pipeliner’s Westridge Marine Terminal.

“The blockade is an act of peaceful resistance to the Trans Mountain Expansion pipeline and tanker project,” Greenpeace said in a statement. “It comes on the heels of months of escalating resistance led by Indigenous communities and supporters across Canada and around the world.”

“We’re going to be here for quite some time, throughout the day and night,” climber Will George told CTV News via video chat. “He said they are comfortable, equipped with food and water, and in no rush to leave,” the TV news report states.

George, a Watch Tower guardian and member of the Coast Salish First Nations community, added that “I was asked to do this by my Elders and my spiritual leaders. It’s in my blood to protect this water.”

“Today with 11 of the most badass people I know we will ensure no oil tankers go through these waters,” tweeted Greenpeace climate and energy campaigner Mike Hudema. “@JustinTrudeau time to get on the right side of history. #Climate leaders don’t buy pipelines.”

Kinder Morgan “responded to questions about the blockade with a brief statement saying there were ‘no vessels scheduled to arrive or depart’ its terminal in the morning,” CTV reports. “The company did not answer follow-up questions about whether there are tanker departures scheduled for the afternoon or on Wednesday.”

But “multiple marine traffic tracking websites list the Serene Sea as being moored east of the bridge.”

Local police reported there were no traffic disruptions on the deck of the bridge.