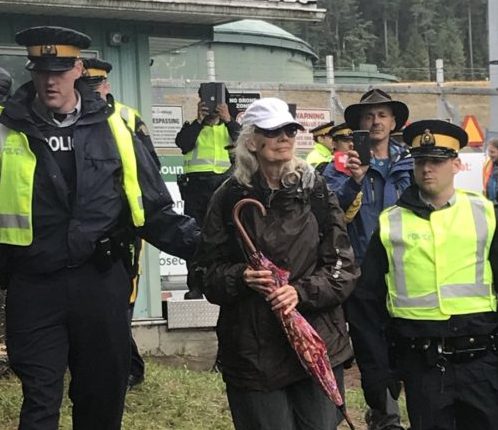 Order of Canada recipient Jean Swanson and former B.C. Teachers’ Federation president Susan Lambert were among the eight people arrested Saturday in the continuing blockade of the Kinder Morgan tank farm on Burnaby Mountain, bringing the total number of arrests to 207 since March.

“The Order of Canada is given to people who want a better country,” said Swanson, 75, who received the honour in 2017 for her work with impoverished communities in Vancouver’s Downtown Eastside. “Spending billions of taxpayer dollars on an oil pipeline given the threat of climate change is not making Canada a better country.”

“There comes a time to look at what’s at stake for our grandchildren,” said Lambert. “I feel very responsible, and it’s time to stand for what is right.”

The eight protesters will face a week in jail following their arrest.

Saturday’s release from Protect The Inlet points to the ongoing impacts of construction at Kinder Morgan’s tank farm and marine terminal. The company “recently released a plume of sediment into a nearby salmon-bearing creek, which is part of the Fraser River watershed,” the organization states.

“We’ve had a real problem here the last five years at the Burnaby terminal,” said streamkeeper John Preissl. “Two salmon creeks run through the Burnaby Mountain tank farm: Eagle Creek and Silver Creek, which is listed as at-risk. What we’re most concerned about is the shoddy construction work at the terminal.”

In other pipeline news, National Observer reports that the Trudeau government has promoted Erin O’Gorman, previously the associate deputy minister responsible for consultations with First Nations leading to approval of the Trans Mountain project, despite widespread concern that the approval was “rigged”. And a commentary in Fortune magazine rips into Ottawa’s decision to buy the pipeline, askingthe C$4.5-billion question on many Canadians’ minds: “What is Prime Minister Justin Trudeau thinking?”

Building on their past work on supply-side strategies for keeping fossil fuels in the ground, economists Fergus Green of the London School of Economics and Richard Denniss of the Australia Institute point to an “emerging principle” that brings together the growing mobilization around fossil fuel development around the world by connecting the projects to climate change: “In a world facing catastrophic global warming, new fossil fuel projects are morally wrong. To this moral message is added a prudential one: As the transition away from fossil fuels gathers pace, new fossil fuel projects become economically risky propositions.”

The federal government “thinks it can manage these project risks and turn a profit, or at least break even, from the expanded pipeline,” Green and Denniss write. But it can only achieve that goal by “trampling on First Nations’ land rights and exposing communities to oil spills”, and counting on the countries of the world to miss their Paris Agreement targets.

“If any or all of these valid concerns cause the Trans Mountain project to fail, then Canadian taxpayers will be on the hook for the commercial liabilities of a dud investment,” they write. “It’s lose-lose for Canadians.”

Meanwhile, after former Bank of Canada governor predicted that people will die on the protest lines before the Trans Mountain expansion project is completed, groups on both sides of the issue assuredfossil industry outlet JWN Energy that they won’t be the ones to let matters get violent. Calgary realtor Cody Battershill said the pro-pipeline CanadaAction.ca “has ‘zero tolerance’ for violence and encourages respectful behaviour at all times”, while Greenpeace Canada Senior Energy Strategist Keith Stewart noted that his organization “trains people in ‘de-escalation tactics’ and respectful civil disobedience, never violence,” JWN reports.

Both spokespeople expressed their doubts about motivations on the other side, with Stewart pointing to what JWN paraphrased as “some vicious personal attacks against environmentalists on social media”.[Well, yes. –Ed.]

He called Dodge’s comments “completely irresponsible”, suggesting the statement had justified state violence against protesters. “People won’t die unless someone else kills them,” he noted.

As far as interactions among opposing protest groups, “you can…leave space between the two groups,” Stewart added. “Remember that we’re not fighting each other as individuals. We’re arguing about what kind of future we want to leave for our kids.”