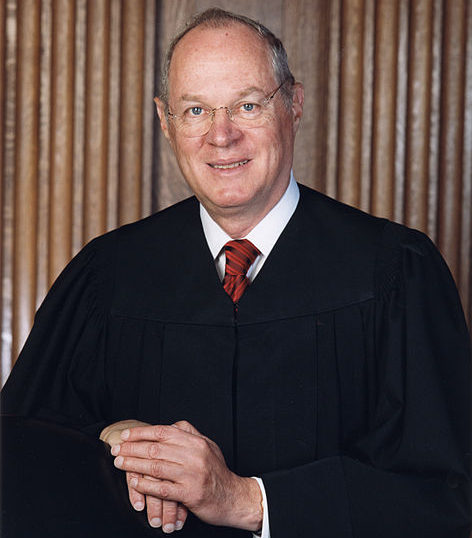 Collection of the Supreme Court of the United States/Wikimedia Commons

Justice Anthony Kennedy’s decision last week to retire from the U.S. Supreme Court could have severe implications for a wide array of issues, including environment and climate change, given the virtual certain that Donald Trump will appoint a replacement who will “side with the court’s now clear conservative majority”, meteorologist and veteran climate hawk Eric Holthaus writes for Grist.

“Kennedy has been the swing vote for decades. And without his moderating influence, advocates of the environment will face a steep challenge in winning over a majority of the justices,” Holthaus states. “With time quickly running out before the world locks in dangerous levels of climate change, that’s a frightening proposition.” Given that the decisions from a more conservative court could hold sway for decades, “it’s not an exaggeration to say that, when it comes to climate change and environmental protection, the next Supreme Court justice’s opinions will have consequences that are planetary in scope.”

Grist recalls that Kennedy was the swing vote in Massachusetts v. EPA, the landmark case that gave the U.S. Environmental Protection Agency authority to regulate greenhouse gases as pollutants. “It would be quite something if a new court, by a 5-4 decision, opted to reverse such recent precedent,” Columbia Law School’s Michael Burger told Holthaus. “But given what we have seen in the last few days [from the Supreme Court], it’s not impossible to see it happening.”

Augusta Wilson of the Climate Science Legal Defense Fund said Kennedy’s replacement will also have a say in Trump’s efforts to roll back the Obama-era Waters of the United States rule, which seeks to protect wetlands and other smaller bodies of water under the U.S. Clean Water Act. And a clear conservative majority on the court would bode badly for efforts to limit greenhouse gas emissions from power plants, which are almost certain to be scaled back in the regulations Trump introduces to replace President Barack Obama’s Clean Power Plan.

“The administration will no doubt be gutting some of these rules and potentially violating statutory mandates in the process,” said Columbia’s Jessica Wentz. “It’s much more likely that the Supreme Court will uphold the replacement rules with another Trump nominee replacing Kennedy.”

With Trump expected to announce his nominee July 9, Congressional Democrats are already gearing up to delay a confirmation vote until after mid-term elections November 6—citing a precedent established by Senate Majority Leader Mitch McConnell two years ago.

In February 2016, following the sudden death of conservative judge Antonin Scalia, Obama nominated centrist Merrick Garland to fill the vacancy. At the time, with many months to go before the 2016 election, “McConnell insisted that the Senate should not consider the nomination during a presidential election—and that the next president, not Mr. Obama, should pick Justice Scalia’s replacement,” the New York Times recalls.

“The American people‎ should have a voice in the selection of their next Supreme Court justice,” McConnell declared in a statement issued the night Scalia died. “Therefore, this vacancy should not be filled until we have a new president.”

“All we are doing is following the longstanding tradition of not fulfilling a nomination in the middle of a presidential year,” he (incorrectly) told Fox News Sunday the following month.

Now, Democrats are trying to build on McConnell’s high-minded statement of principle.

“My @SenateGOP colleagues should follow the rule they set in 2016 not to consider a SCOTUS nominee in an election year. Sen McConnell would tell anyone who listened that the Senate had the right to advise & consent, & that was every bit as important as POTUS’ right to nominate,” tweeted Senate Minority Leader Chuck Schumer (D-NY).

“With so much at stake for the people of our country, the U.S. Senate must be consistent and consider the President’s #SCOTUS nominee once the new Congress is seated in January,” agreed Sen. Dick Durban (D-IL).