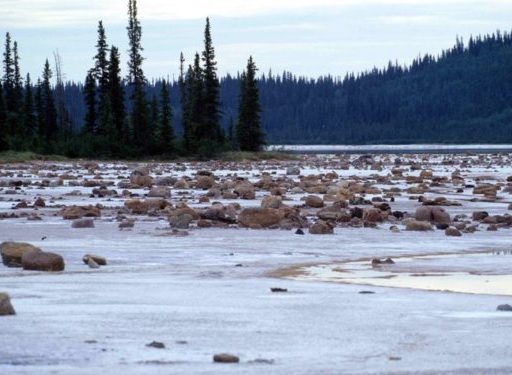 Canada’s Wood Buffalo National Park is at risk of losing its world heritage site designation and being placed on UNESCO’s endangered list, thanks to the combined and mounting impacts of climate change, fossil development, and hydroelectric projects across a 4.5-million-hectare territory that spans parts of Alberta and the Northwest Territories.

In 2017, the UN agency gave Canadian officials a year to come up with a plan to stem the “rapid deterioration” of the park, The Guardian reports, concluding that a failure to act would “constitute a case for recommending inscription of Wood Buffalo National Park on the List of World Heritage in Danger”.

But last week, ahead of a UNESCO meeting in Bahrain, Canada responded with the stark admission that “desired outcomes for the world heritage values are not being met”. Just days before Environment and Climate Minister Catherine McKenna tweeted her congratulations for the formation of a new, 2.9-million-hectare world heritage site under Indigenous stewardship along the Manitoba-Ontario border, The Guardian and The Canadian Press were both out with stories on the continuing losses in the country’s second-largest national park.

Wood Buffalo “has long been a home to the Cree and Dene Indigenous peoples,” The Guardian notes. “It is also critical habitat for the largest free-roaming buffalo population in the world, who walk its forests, and its watershed is the only untouched breeding ground for endangered whooping cranes.” The park also “includes part of the world’s largest boreal river delta, formed by the Peace and the Athabasca rivers, which both run through the park and create the conditions for an extremely diverse ecosystem.”

The UNESCO review dates back to 2014, when the Miskew Cree First Nation warned the park was rapidly deteriorating. “Community members no longer drink the fresh water from lakes or streams over fears of contamination, and have reported that wild fish and game have developed abnormal flavours and deformities,” The Guardian states, citing Melody Lepine, the community’s director of government and industry relations. “While there is no clear explanation of what has caused problems in the food sources, the Canadian government’s environmental assessment report says high levels of mercury have been found in fish and bird eggs.”

“The community has been seeing first-hand the way the Peace Athabasca Delta has been deteriorating,” Lepine told The Guardian.

“A 2016 study by UNESCO researchers warned that the pace and complexity of industrial development around the park was ‘exceptional’, and found the proper mechanisms to adequately study its impacts were absent,” the paper adds. In 2017, UNESCO and the International Union for the Conservation of Nature warned that the park’s challenges were “far more complex and severe than previously thought”. Construction of the Site C dam is renewing concerns about water diversions from the park, and tar sands/oil sands operations in northern Alberta draw large volumes, as well.

“Seasonal flows in the Athabasca River have declined over the past 50 years due to a combination of increased water withdrawals and (past) climate change,” the Canadian government report stated.

The Canadian Press notes Alberta’s energy regulator recently approved a new tar sands/oil sands mine north of the park, and a project by Teck Resources is under consideration.

Parks Canada told Cecco the government “is responding to the 2017 request of the World Heritage Committee to develop an action plan for the site, and is taking concrete steps to address the recommendations of the recent reactive monitoring mission to Wood Buffalo National Park.” Lepine responded that “nothing Canada is doing today is demonstrating they are really taking this seriously. Our health, our way of life, and our culture depend on Wood Buffalo. We have spiritual ties to that area that go far deeper than Canada’s commitment to it.”