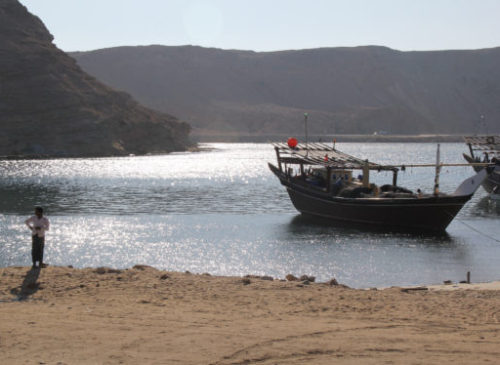 The small coastal fishing village of Quriyat, Oman set an ominous record last Tuesday, when the temperature never dropped below 42.6°C/108.7°F over a full 24-hour period.

“For a location to remain no lower than 109° around the clock is mind-boggling,” the Post notes. “In many locations, a temperature of 109° even during the heat of the afternoon would be unprecedented.”

Pending verification by the World Meteorological Organization, the astonishing heat wave was the second extreme weather even in two months for Oman, after a Category 3 tropical cyclone—the most intense on record for the Arabian Peninsula—hit its southwest coast in May.

“Tuesday’s record-breaking heat resulted from a strong high-altitude, high-pressure system or heat dome anchored over the region, which pumped air temperatures up to 15°F above normal,” writes Post reporter Jason Samenow. “Masters said sea surface temperatures in the adjacent waters were about 90°F, keeping air temperatures elevated even through the night and offering no reprieve from the oppressive conditions.”

Samenow points to the “tremendous number of hot-weather milestones established around the world in just over the past year”, and cites nine of the most significant ones, with record or unseasonably high temperatures ranging from 90 to 128.7°F (32.2 to 53.7°C) in Dallas, Texas (a record 90°F/32.2°C in the normally cooler month of November); Death Valley, California; Shanghai; San Francisco; Southern California; Córdoba, Spain; two locations in Pakistan; and Ahvaz, Iran.