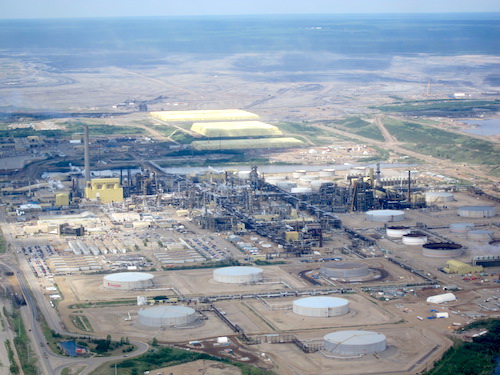 While all eyes in the fossil world were on an OPEC meeting in Vienna that was expected to influence the global price of oil for the coming months, a month-long, 360,000-barrel-per-day outage at a Syncrude plant in northern Alberta through the month of July will have the greater impact on markets, according to an analyst at Goldman Sachs.

The outage, brought about by a transformer explosion at the plant, is “flipping the global oil market on its head and slamming shares of producers that depend on the plant,” Bloomberg reports.

“Syncrude is very important,” said Auspice Capital Advisors founder and chief investment officer Tim Pickering. “It’s one of the longest-standing and longest-lifespan systems going. So having those barrels off, which are considered base barrels for the system, is fairly impactful.”

“With less oil coming from Canada, traders are paying a record premium for crude at America’s biggest distribution hub in Cushing, Oklahoma,” the Financial Post notes. “The disruption is helping set the U.S. apart from the rest of the world and intensifying a U-turn in the dynamics of the global market,” Bloomberg adds, after OPEC and its allies agreed to increase production by as much as a million barrels per day. That action drove down the cost of Brent crude oil, a price benchmark for nearly half of the world’s oil, by nearly $2 per barrel, while the major North American benchmark, West Texas Intermediate (WTI), was up 29¢.

“In Canada, the outage is pummeling shares of Suncor, which owns a 59% stake in the operation,” Bloomberg notes. “Meanwhile, shares of Suncor rival Canadian Natural Resources Limited are outperforming their benchmark, on the expectation that they’ll be helped by the sudden availability of additional pipeline space.” Overall, the value of the Standard & Poors/Toronto Stock Exchange “energy” (read: fossil) index was down 1.6%.

“Last week’s outage is just the latest mishap at Canada’s second-oldest oil sands mine, which started operation in the mid-1970s and has faced reliability issues in recent years,” the news agency notes. “The plant last month underwent scheduled maintenance that took longer than expected.”

But Pickering at Auspice Capital Advisors wasn’t too bothered. “If you consider how vast these operations are, you’re going to have these things happen from time to time,” he told Bloomberg. “It just shows you how on-the-margin the system is.”