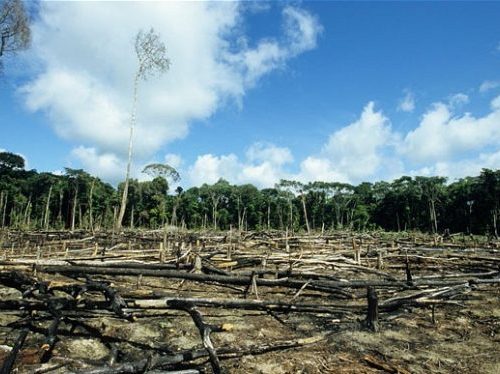 Deforestation around the world claimed the equivalent of a full-sized soccer pitch every second in 2017, “jeopardizing efforts to tackle climate change and the massive decline in wildlife,” The Guardian reports, citing satellite mapping by Global Forest Watch.

The losses, equivalent to the entire land mass of Italy, totaled 29.4 million hectares, the second-highest total since monitoring began in 2001.

“Global tree cover losses have doubled since 2003, while deforestation in crucial tropical rainforest has doubled since 2008,” the paper states. “A falling trend in Brazil has been reversed amid political instability, and forest destruction has soared in Colombia,” increasing 46%.

While deforestation was down 60% in Indonesia, thanks to fewer forest fires and government action, “the Democratic Republic of Congo’s vast forests suffered record losses.”

Overall, “forest losses are a huge contributor to the carbon emissions driving global warming, about the same as total emissions from the U.S., which is the world’s second-biggest polluter. Deforestation destroys wildlife habitat and is a key reason for populations of wildlife having plunged by half in the last 40 years, starting a sixth mass extinction.”

And yet “the main reason tropical forests are disappearing is not a mystery—vast areas continue to be cleared for soy, beef, palm oil, timber, and other globally traded commodities,” said Frances Seymour of the World Resources Institute, one of the Global Forest Watch partners. “Much of this clearing is illegal and linked to corruption.”

With only 2% of climate action funding going to forests and land protection, “we are trying to put out a house fire with a teaspoon,” she added. “This is truly an urgent issue that should be getting more attention.”

In Colombia, which The Guardian cites as “a global hot spot for diversity”, the sudden surge in forest loss traces ironically to a long-sought peace agreement leading to demobilization of the Revolutionary Armed Forces of Colombia (FARC) rebel group. The end of hostilities “left a power vacuum, and illegal clearing for cattle, logging, and cocaine production has soared.” The New York Times report on the Global Forest Watch release also points to forest losses in the Caribbean due to Hurricanes Irma and Maria last year.

Victoria Tauli-Corpuz, United Nations special rapporteur on the rights of Indigenous peoples, noted that the impact of clearcutting extends beyond the forest itself. “Along with this violence against the Earth, there is growing violence against the people who defend these forests,” she told The Guardian, noting that half of the 197 forest defenders killed last year were Indigenous people.

“Indigenous people have long stewarded the world’s forests that are crucial to the fight against climate change,” she said. “The new data finds the rate of tree cover loss is less than half in community and Indigenous lands compared to elsewhere.”