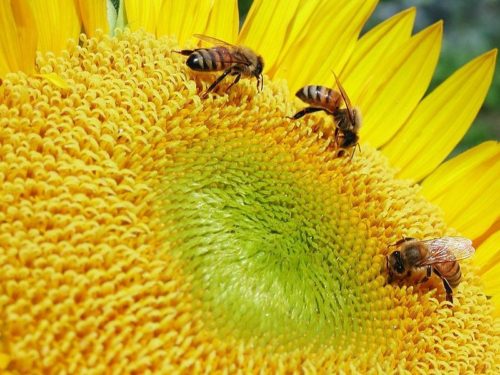 As global warming begins to hammer already vulnerable insect pollinators—and their companion flowers—around the world, scientists are working frantically to distinguish “between the effects of year-to-year variability and climate change,” the better to advise increasingly alarmed policy-makers.

Spring came early and hot in Austria this year, accelerating the emergence of key pollinators. Unfortunately, the flowers they rely on for nectar “are not responding in sync”, InsideClimate News reports, and scientists like butterfly expert Marion Jaros are concerned that species like the “beautiful and rare” Osterluzeifalter will starve.

Thousands of miles west, University of Maryland biologist David Inouye can see the impacts of a “brutally dry” winter from the deck of a research station cabin in the West Elk Mountains of Colorado: “There are fewer wildflowers, and more hummingbirds are using the feeders because there is less food for them in the fields and forest glades,” he told ICN.

Larger studies include a 2017 project focused on Germany, and ongoing research at the Rocky Mountain Lab, where Inouye has been tracking the impacts of climate change on local ecosystems for the past 45 years. The research positions the disturbing anecdotes as part of a larger narrative of a destabilizing climate.

University of East Anglia ecologist Anthony Davy, whose research into the past flourishing and present decline of a rare English orchid, is helping scientists grow more certain about long-term trends. He said climate change is very likely “a significant factor in the alarming decline of pollinators in Europe”, since its disruptions induce “a widespread loss of nectar and pollen.”

Davy’s work focuses on the spider orchid, whose spring emergence is increasingly out of sync with that of the bee upon which it has long depended for pollination. “It’s a very specific example of what can happen,” he told ICN. “It indicates the potential for things to go really badly, and things are moving quite fast.”

European policy-makers are attuned to the problem. A recent European Commission report states that “10% of pollinating insects are ‘on the verge of extinction,’ and a third of all butterfly and bee species are declining,” InsideClimate notes. Recently, the European Commission formally recognized climate change as a central threat to all insect pollinators, in a June 1 proposal to actively prevent further decline.

Urged on by a 2017 study in Germany that showed a 75% decline in flying insects across a “big network of protected areas,” the Commission is proposing a ban on neonicotinoid pesticides, as well as stepped-up habitat conservation efforts.

“Large, connected patches of habitat can help pollinating insects migrate to areas with better conditions, but if those routes are cut off, local populations could blink out,” writes ICN. And such “blinking out” could have catastrophic consequences, given that “about 80% of all wild plants rely on insect pollinators, and the majority of food crops benefit from them,” adds reporter Bob Berwyn, citing a European Commission report.

Advocates for America’s populations of pollinators are also increasingly attuned to the burgeoning threat, recognizing “that the regionally documented breakdowns of pollinator-plant relationships could coalesce into a national pollinator emergency for the U.S., putting at risk US$3 billion worth of pollination services,” said Scott Black, executive director of the Xerces Society for Invertebrate Conservation.

To help pollinators avoid a “global warming train wreck”, ICN says the Xerces Society “is working with landowners in California’s agriculturally vital San Joaquin Valley to plant 20 miles of hedgerows with a variety of native vegetation, to help connect habitat across big tracts of the Central Valley landscape.”