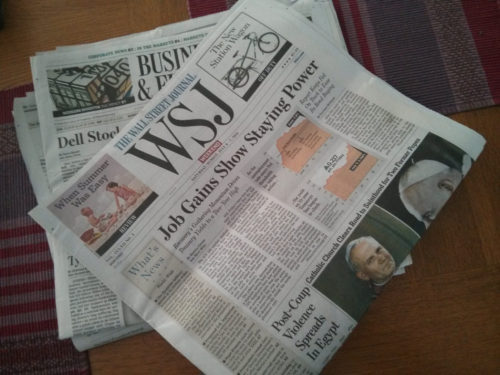 The Wall Street Journal contributed heavily to the fog of U.S. climate denial last month, publishing two demonstrably ill-informed and biased opinion pieces and actively confirming the message of the first in its selection of responding letters to the editor.

The onslaught on the Journal’s opinion page began in May, with an incoherent effort by famously fossil-funded climate denier Fred Singer to decouple sea level rise from global warming. His narrative “so badly rejected basic physics, it prompted one researcher to remark, ‘If this were an essay in one of my undergraduate classes, he would fail,’” The Guardian reports.

While the WSJ did give the floor to two active, accredited climate scientists who firmly rebutted Singer in a letter to the editor, the conservative media titan gave final word to a self-described retired NASA meteorologist whose own letter tossed out the long-discredited claims that “global warming from fossil fuel use is modest and benign, and higher CO2 levels measurably benefit agriculture and natural ecosystems, outweighing hypothetical harms.”

“A few days later, the WSJ opinion page was at it again,” reports The Guardian, with a post by longtime climate denier Stephen Hayward. He claimed “that ‘climate change has run its course’ because nobody is doing anything serious to solve it, and nobody cares about climate change anymore.” That post showed a distinct lack of regard for the facts, writes environmental scientist Dana Nuccitelli.

“For example, when pressed on the fact that every country save America has agreed to implement policies to curb climate change, Hayward cited Japan as a counter-example that’s building more coal power plants since the Fukushima nuclear plant disaster,” he writes.

While “Japan’s climate policies are highly insufficient to meet the Paris goals,” Nuccitelli notes, the country has also signed on to the Paris Agreement, “whose framework allows signatory countries to periodically strengthen their policies and commitments and thus eventually meet the targets.”

Hayward’s opinion piece hit a particularly low point, observes the Guardian, when he compared climate change “to a car alarm whose blaring noise everybody soon tunes out.” Nuccitelli’s rebuttal is sharp.

“Unlike a triggered car alarm, climate change poses ever-increasing risks,” the paper states. “It won’t just go away if we ignore it. It’s much more like a fire alarm sounding off in a building whose occupants have been locked in.”