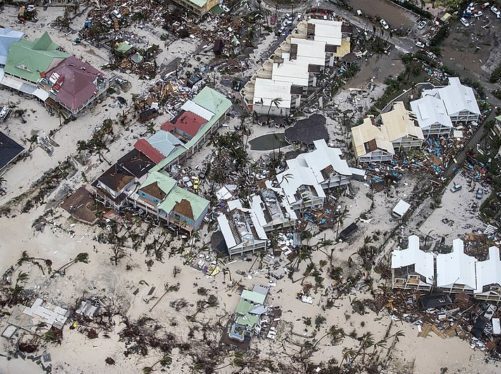 “Climate hawks have long had the strong instinct that it’s the economic models, not the physical science models, that are missing something—that the current expert consensus about climate economic damages is far too sanguine,” Roberts writes. That’s a serious problem, because “projections of modest economic impacts from even the most severe climate change affect climate politics in a number of ways. For one thing, they inform policy goals like those President Obama offered in Paris, restraining their ambition. For another, they fuel the arguments of ‘lukewarmers’,” including most members of the Trump cabinet, “who say the climate is warming but it’s not that big a problem.”

Roberts traces much of the confusion back to an economic model developed by Yale University economist William Nordhaus, which concluded that even an extreme 6.0°C of average global warming would only reduce global GDP by 10%. By contrast, he writes, the physical sciences characterize that outcome as an “unlivable hellscape”.

But now, two new papers, one focusing on the U.S. and the other taking a more international view, are reinforcing the point that a review of the economic models is long overdue.

The U.S. paper is a commentary in the journal Nature Climate Change by Alexander Barron of Smith College, a former Environmental Protection Agency and congressional staffer who worked in the United States’ ill-fated climate legislation between 2008 and 2010. He concludes that the small cluster of economic models that tend to set U.S. climate policy “are systematically underestimating climate change’s economic impacts and overstating the costs of mitigating it,” Roberts writes.

Barron says the studies rely on out-of-date data that fail to capture rapid reductions in renewable energy costs, miss decarbonization opportunities outside the electricity sector, take an unsophisticated approach to modelling energy efficiency, and omit or undercut the health and social benefits of the post-carbon transition.

“In fact, none of the modeling platforms historically used to analyze U.S. climate policy produce direct estimates of the economy-wide reductions in air pollutants, let alone their economic impacts,” Barron wrote. “Shortcomings in existing policy models represent barriers to climate policy that could be reduced with modest resources and limited political capital.”

Roberts adds that “it would be nice for better models to be available when the U.S. returns to sane climate policy-making.”

The international paper, published in the Review of Environmental Economics and Policy, critiques integrated assessment models (IAMs) in which “physical impacts are often not translated into monetary terms,” with the result that “they have largely been ignored by climate economists,” stated co-authors Thomas Stoerk of the U.S. Environmental Defense Fund, Gernot Wagner of the Harvard University Center for the Environment, and Bob Ward of the ESRC Centre for Climate Change Economics.

“The heart of the critique is that IAMs do not properly account for ‘tipping points,’ levels of atmospheric change ‘beyond which impacts accelerate, become unstoppable, or become irreversible,’” Roberts writes. “We do not have a great understanding of tipping points or exactly when they might occur. But we know that they become more likely as temperature climbs and become almost certain as temperatures rise more than 4.0, 5.0, or 6.0°.”

The chances of those extreme outcomes are in the five to 10% range, but the authors conclude that an “ambiguity aversion” baked into IAMs makes them less likely to account for the more severe risks associated with runaway climate change. And yet, Roberts notes, “if they properly understood it, people probably wouldn’t like the idea of betting millions of lives and possibly the future of the species on avoiding an outcome with five to 10% probability.”

With “a lot of technical mumbo-jumbo flying around in these conversations”, Roberts points back to the reason climate modelling is so important.

That kind of honest, forthright assessment “would justify far more policy and investment to fight climate change than has been seen to date in the U.S. or any other major economy,” Roberts concludes. “We shouldn’t let the blind spots and shortcomings of current models undermine political ambition.”