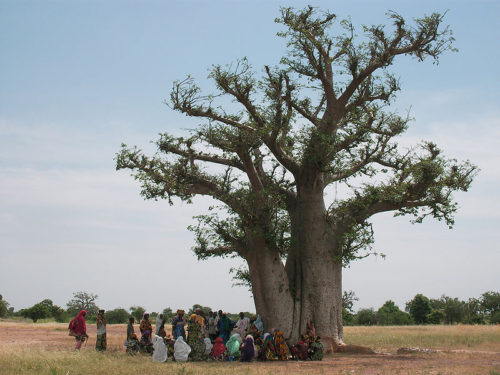 Africa’s ancient and iconic baobab trees are dying off, and scientists say climate change is the only apparent cause.

In an article that goes into the unique history and architecture of the trees, The Atlantic notes that of the 13 oldest baobabs in the world, four have died in the last dozen years, and another five are dying. In one stand of seven trees, six were lost in two years.

Relatively little is known about baobab die-offs in centuries past, since the trees “decay very quickly, and leave few traces behind,” the magazine notes. But “when around 70% of your 1,500- to 2,000-year-old trees died within 12 years, it certainly is not normal,” said Erika Wise of the University of North Carolina, Chapel Hill. “It’s difficult to come up with a culprit other than climate change.”

Adrian Patrut of Romania’s Babes-Bolyai University, who determined the trees’ ages by carefully carbon-dating their various stems, blamed “an unprecedented combination of temperature increase and drought in southern Africa, over the past 10 to 15 years.” He told The Atlantic he initially thought one 1,500-year-old, 32-metre-wide baobab, which was in full bloom in March, 2004 and dead by New Year’s Day, 2005, had succumbed to disease. But the pattern of deaths among the baobabs is inconsistent with anything contagious, and “many of them were found in national parks, which absolves agricultural practices and other local human activities,” The Atlantic notes.

“These large and monumental trees, which can live for 2,000 years or more, were dying one after another,” Patrut said. “It’s sad that in our short lives, we are able to live through such an experience.”

Atlantic staff science writer Ed Yong points to unpredictable annual rainfalls as a particular hazard for the largest and oldest baobabs. “To stay erect, these trees must absorb between 70 and 80% of their volume in water,” he writes. Early last year, after the rainy season set to begin in September 2015 came five months late, one old tree “collapsed in January, with just 40% water in its stems.”

Wise says the loss of ancient trees is not limited to baobabs, or to Africa.

“In Wyoming, Idaho, and Montana, I’ve come across whole forests of trees that have died since 2001,” she told Yong. “While they are not as old as the baobabs, they are 400 to 500 years old. The die-off has other immediate causes, like insects, but a 500-year-old tree has experienced a lot of insect outbreaks and lived through them. Something is pushing them over the brink this time around.”